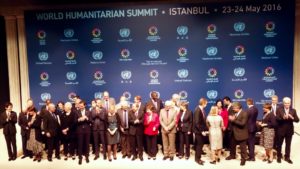 The “Grand Bargain” is the name for a package of reforms to humanitarian funding, launched at the World Humanitarian Summit. Thirty representatives of donors and aid agencies produced 51 “commitments” to make emergency aid finance more efficient and effective.

To some it hasn’t gone nearly far enough. Others say, given a few short months, the bureaucracies did well to find so much to agree on. To overhaul the complex budgeting and contracting of emergency aid is, according to Lilianne Ploumen, the Dutch development minister, “much more complicated than many people think”.

“It could be the Grand Bargain for business-as-usual unless there are more specific actions”, said Christina Bennett of London think tank, the Overseas Development Institute. “We need timelines and targets” or else it will be just “tinkering around the edges”.

A director at the World Bank, Colin Bruce, also said follow-up was a “big issue” to be taken up urgently. The Grand Bargain currently has no institutional home and future arrangements would likely be taken up in late June, he told IRIN.

Analyst Antonio Donini told IRIN it wouldn’t change “the power dynamics in the system,” being drawn up with “only the presence of “the oligopoly”. The group included just 15 donors and 15 aid agencies – together commanding the lion’s share of the world’s emergency aid spending.

The Grand Bargain agreement is not simply a cost-saving measure, but will produce annual savings of US$1 billion within five years, according to the group. This would represent only some five percent of current spending.

The process hasn’t been all smooth sailing. There was some “heat” in the negotiations, according to one participant. Another senior NGO official said some reforms had gradually been watered down in the negotiation process. For example, using cash to help people gets only a lukewarm endorsement in the final text. He explained that, for one, the US Congress was unlikely to embrace it, and (like many others), preferred a style of aid that produced “things you can take pictures of”, like tents, or a water well.

Some things are hard to change. A funding analyst said the big donors have little choice but to spend the bulk of their budgets through large multilateral UN agencies, which handle the largest grants in emergency aid. “Their job is to disperse money,” he said. This weakened donors’ ability to extract UN reforms, he said. However, there are few civil servants in aid ministries, partly because of economic, parliamentary and media pressure to reduce overheads. “The bilateral agencies [donors] have no choice but to dump massive amounts of money into the multilateral system,” he said.

Some of the measures to reduce bureaucracy and paperwork in the Grand Bargain may appear prosaic, but the relief from form-filling burden could be significant.International Committee of the Red Cross president Peter Maurer said “it was absurd to spend so much time and money for reporting that no one would read”. USAID administrator Gayle Smith noted ironically that she had recently received a “standing ovation” for talking about the topic of “uniform reporting requirements”.

Of the ten areas covered, two have gone further than others: transparency and funding of local and national aid agencies. Those hoping for major reform on cash-based aid and needs assessments are generally disappointed.

On transparency, the group committed to publish their financial data in a common open format within two years. Nils Carstensen of Local2Global protection, an NGO policy unit, said the current data situation “is so bad, it can only get better”, saying there are “huge unknowns” in the most basic tracing of funding flows.

Local NGOs too emerge winners. IRIN asked southern NGO activist Degan Ali, a driving force in the creation of the new NEAR Network, for a brief comment on the Grand Bargain. She simply said “25%”. She was referring to a target for local NGOs to get a quarter of international humanitarian funding by 2020. This would be many times more than the current proportion, and making a dent in the dominance of giant UN agencies and international NGOs. A greater embrace of local capacity would build “a culture of respect… of trust” and “shared risk”, said International Federation of Red Cross and Red Crescent Societies Secretary-General As Sy.

The pledge: “publish timely, transparent, harmonised and open high-quality data on humanitarian funding within two years”. The agreement notes that the International Aid Transparency Initiative (IATI) data model is likely to be the agreed format. Several major donors already publish at least some of their information in this format. This should help accountability both upwards to the donor and downwards to the recipients of aid.

Since the latest figures indicate only 0.4% of emergency funding goes direct to local and national operators, the target of 25% by 2020 (even if “as directly as possible”) is high. Southern NGOs will likely receive more funding, on better terms, but will not easily shake off the sub-contracting relationship with the UN agencies and big international NGOs.

It’s a major disappointment to cash advocates that the Grand Bargain has no firm targets for the expanded use of cash, despite studies saying it is now beyond question that it works. The text is contradictory. On one hand, it says “using cash helps deliver greater choice and empowerment to affected people and strengthens local markets, but remains underutilised”. On the other, the paper calls for further research “to better understand its risks and benefits”.

While donors want their grantees to trim costs, recipient aid agencies also blame donor bureaucracy for adding friction to their transactions. “Reducing management costs depends upon reducing donors’ and aid organisations’ individual reporting requirements and oversight mechanisms,” the document states. Donors should “harmonise” boilerplate grant agreements. Aid agencies are obliged to be more open about their real costs “by the end of 2017” and meanwhile find savings from sharing back-office costs such as transport, logistics, IT and insurance.

The question of needs assessment is fraught. Critics say the aid agencies too often get to define the scale of the problem, pick where they wish to intervene and set their price tag. The Grand Bargain text tackles only a part of the problem of overlapping and duplicative assessments by involved aid agencies. It says donors and aid agencies will “provide a single, comprehensive, cross-sectoral, methodologically sound and impartial overall assessment of needs for each crisis to inform strategic decisions on how to respond and fund thereby reducing the number of assessments….” De-linking assessment from response, by example by commissioning independent assessments, was floated in earlier drafts but not the final text. Assessment specialists ACAPS call this a “Grand Step Sideways”.

The end customers of aid often have little choice or influence in the services they get, and feedback mechanisms so far have had little impact in changing programme delivery. The Grand Bargain states that “we need to provide accessible information, ensure that an effective process for participation and feedback is in place and that design and management decisions are responsive to the views of affected communities and people”. The agreement invokes two different sets of guidelines for this, the Core Humanitarian Standard and the IASC Commitments to Accountability to Affected Populations. Donors will have to agree that programmes can change as a result of community feedback, while aid agencies have to show how they incorporate it into their programmes.

In long-running crises, aid agencies often find themselves presenting similar programmes to donors year after year that have no longer-term goals and waste time and effort. The greatest proportion of humanitarian finding is issued on a 12-month cycle. The Grand Bargain target is for five countries to trial multi-year planning and funding by the end of 2017.

Donors typically earmark funds to specific projects, but it can become wasteful and encourage micro-management. The Grand Bargain suggests that various varieties of pooled funding mechanisms will expand. The UN’s CERF fund, which is a funding source for UN agencies from multiple donors, is likely to rise to one billion dollars a year. The goal to reduce earmarking is worded without much promise of enforceability: “The aim is to aspire to achieve a global target of 30 percent of humanitarian contributions that is non-earmarked or softly earmarked by 2020.” Measurable progress on this will depend heavily on classifications of earmarking, so the first action point is to determine what constitutes earmarking or “soft” earmarking. Interestingly, aid agencies who hope to enjoy less strings attached to their monies will also have to pass down the benefit – the smaller NGO sub-grantees of a major UN agency or NGO should also get less strings attached.  Crticis note that an earlier initiative to reduce earmarking, Good Humanitarian Donorship, is not mentioned in the Grand Bargain text and has not been fully implemented.

The text is relatively straightforward, and puts more onus on the donors: “simplify and harmonise reporting requirements by the end of 2018 by reducing its volume, jointly deciding on common terminology, identifying core requirements and developing a common report structure“.

Combining emergency and development funds and agendas is a hot-button issue. Attempting to find a delicate balance, the text says “it is about working collaboratively across institutional boundaries on the basis of comparative advantage”. The general intent is broad (the Red Cross Movement has distanced itself from this section): “use existing resources and capabilities better to shrink humanitarian needs over the long term with the view of contributing to the outcomes of the Sustainable Development Goals. Significantly increase prevention, mitigation and preparedness for early action to anticipate and secure resources for recovery. This will need to be the focus not only of aid organisations and donors but also of national governments at all levels, civil society, and the private sector.”