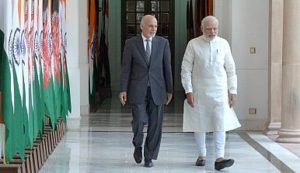 “India cannot be a spectator as chaos ensues in Afghanistan, for it will not be safe from the spillover.”

U.S. President Barack Obama’s decision to halt the further withdrawal of U.S. troops from Afghanistan and instead send additional advisers to assist the deployed forces underscores the deteriorating security situation. His decision comes after high casualties among the Afghanistan National Security Forces in combat operations, coupled with the resurgence of Taliban and a fast-evolving threat environment in the region.

Afghanistan is a place where post-war engagement will prove to be a more crucial battleground than the war itself. India cannot be a spectator as chaos ensues in Afghanistan, for it will not be safe from the spillover. Hence, it is imperative for Indian to assist Afghanistan in building sound political structures, a strong military and economy, along with human resources. It cannot afford to let Afghanistan slide back to the days of Taliban rule after 15 years of Western intervention. Against this backdrop, India’s push for Afghanistan to be included in the South Asian Association for Regional Cooperation (SAARC), in 2005, was a smart move, given close links between peace in Afghanistan and regional security.

The Threat to India’s Security in Afghanistan

India’s apprehensions about Afghanistan’s instability are primarily driven by its own pragmatic security concerns. On March 2, 2016, the Indian consulate in the city of Jalalabad in Afghanistan was attacked, leaving nine dead and many more injured in the fourth attack on the Indian consulate in the city. Earlier this year, the Indian mission in Mazar-e-Sharif saw a 25-hour long shootout between the terrorists and the security forces.

An unstable backyard is not only pernicious to India’s larger strategic interests abroad and future goals but can also impact its internal security. After the withdrawal of Soviet forces from Afghanistan in 1989, jihadists moved to new conflict zones, including Kashmir. Following 9/11, Pakistani militant groups moved to Afghanistan to fight against the Western coalition; after the withdrawal of ISAF forces from Afghanistan, it is highly likely that they could focus their attention back on Kashmir. Groups like Jaish-e-Mohammad (JeM), Harkat ul-Mujahideen (HUM), and Lashkar-e-Taiba (LeT) might increase their activities in Indian Kashmir, which saw a steady decline in cross-border terrorism over the past decade. This is further intensified by the spike in the number of young Kashmiris joining militant groups over the past year. Burhan Muzaffar Wani’s route to militancy is a case in point. The 21-year-old commander of the Hizbul Mujahideen (HM), described by the locals as the “Robin Hood of Kashmir,” is among the new generation of Kashmiri militants.

The emergence of the Islamic State terrorist group’s local franchise, IS-Khurasan, and al-Qaeda’s South Asian affiliate, AQIS, has further complicated the regional threat environment. Presently, the two militant rivals are currently locked in a furious competition for influence among the local jihadist groups and monopoly over the illegal drug trade. InDabiq, Islamic States’ flagship monthly magazine, the group has clearly mentioned its intention of expanding its presence in Khurasan, which includes India, though the presence of traditional groups like the Taliban and geopolitical conflicts in the Af-Pak region and Kashmir lessen Islamic States’ traction. Similarly, though AQIS has not carried out any significant terrorist attack since its creation in September 2014, it has been reported to be building deep terror networks in South Asia.

If history is anything to go by, Afghanistan has served as springboard not only for al-Qaeda and the Taliban but also for Kashmir-focused terrorist groups. The re-emergence of al-Qaeda’s camp and the presence of Kashmiri militant groups in Afghanistan could be detrimental to Indian regional security and economic interests. During the 1990s, al-Qaeda and the Kashmiri militants worked hand-in-glove with each other in Afghanistan. The hijacking and diverting of an Indian plane by HUM in 1999 to Kandahar, then under the Taliban rule, secured the release of Maulana Masood Azhar, who later founded JeM.

In order to mitigate the threat from an unstable backyard, India has employed a “soft-power” approach in Afghanistan. Its aid, estimated at $1.5 trillion, and development projects are an attempt to strengthen a war-ravaged young democracy, thereby attempting to reduce the vacuum which may allow the Taliban and other groups to emerge.

Another aspect of India’s interest in Afghanistan relates to its need to reduce Pakistani influence in the region. India should contain and balance Pakistan’s influence, which may otherwise hamper Indian interests. Afghanistan has been the battleground for an India-Pakistan proxy war since 2001. New Delhi needs Kabul to get a better view of Islamabad and hence it is pertinent that it fosters positive relations. This relationship can only blossom if Afghanistan is stable and strong.

The threat, however, is not just to Indian embassies and consulates but also to New Delhi’s economic interests in the country. In 2011, a consortium of six Indian companies was awarded mining rights in the Hajigak area. However, after a debate over reducing their initial plan of investing $11 billion to $1 billion, the consortium eventually decided to pull out. The increasing flux in the region was one of the contributing factors behind this significant decision.

The mounting fears in the country are not only an impediment to Indian companies’ ability to tap into Afghanistan’s mineral resources, estimated at $1 trillion, but can prove to be detrimental to ever-growing Indian energy demands. The proposed gas pipeline project TAPI (Turkmenistan-Afghanistan-Pakistan-India), which seeks to connect an energy-rich Central to South Asia, will only see the light of the day if stability is established in Afghanistan

It is important to note that Afghanistan not only serves security and economic interests but is also closely tied to India’s vision of being a regional leader and a great power, coupled with its competition with China over resources and its need to counter Pakistani influence. India’s ability to mentor a nascent democracy will go a long way to demonstrate to the world that India is indeed a major power, especially a responsible one. However, this vision can only be materialized if Afghanistan does not descend into a state of chaos and conflict.

India’s civilian-centric policies, be they the construction of the Salma Dam project or offering annual scholarships to Afghan students, will only bear fruit if India ensures that events do not unfold the way they did after the Soviet pull-out from the country. It is India’s pragmatism that drives its decision not to put boots on the ground and instead invest in constructing the new Parliament building in Kabul and gifting a 97-foot high Afghan flag to in order to cement their friendship.

India, however, needs to enhance its current assistance to Afghanistan given the growing security challenges and economic difficulties. Suffering huge losses from a resurgent Taliban, especially now that the group has grown stronger and expanded territorially, Afghanistan has asked India to provide military supplies. In response to Kabul’s military and economic demands India needs to take a tough decision – how is the regional superpower going to address the burgeoning threat in Afghanistan while keeping in mind its own strategic interests?

Akanksha Narain is a Research Analyst with the Studies in Inter-Religious Relations in Plural Societies (SRP) Programme at the S. Rajaratnam School of International Studies (RSIS), Nanyang Technological University, Singapore.