DEVELOPMENT: Does the west really care about development? 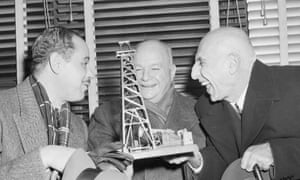 Prime Minister Mossadegh (right) of Iran, is amused by a miniature oil well presented to him during the 1951 US negotiations over oil. Two years later he would be deposed with the help of the CIA. Photograph: Bettmann/CORBIS

We need to stop pretending that the United States, France and Britain are benevolent champions of the poor.

When it comes to international affairs, western politicians love to celebrate their devotion to development. In her flagship speech on development as secretary of state, Hillary Clinton offered stories about US aid transforming the lives of poor people in Indonesia, Nicaragua and South Africa. Laurent Fabius, the minister of foreign affairs for France, recently hailed his country’s commitment to development in the former colonies of west Africa. And at last year’s UN sustainable development goals summit, David Cameron spoke proudly about Britain’s record of providing “stability and security” to poor countries.

But this narrative of western benevolence only works by relying on our collective amnesia. For a slightly less fairytale-like version of the west’s relationship with development, we need to rewind to the decades following the second world war.

After the end of European colonialism in Africa and Asia, and with the brief cessation of US intervention in Latin America, developing countries were growing incomes and reducing poverty at a rapid pace. Beginning in the 1950s, countries like Guatemala, Indonesia, and Iran drew on the Keynesian model of mixed economy that had been working so well in the west. They made strategic use of land reforms to help peasant farmers, labour laws to boost workers’ wages, tariffs to protect local businesses, and resource nationalisation to help fund public housing, healthcare, and education.

This approach – known as “developmentalism” – was built on the twin values of economic independence and social justice. It wasn’t perfect, but it worked quite well. According to economist Robert Pollin, developmentalist policies sustained high per capita income growth rates of 3.2% for at least 20 years – higher than at any other time during the whole 20th century. As a result, the gap between the west and the rest began to narrow for the first time in history. It was nothing short of a miracle.

One might think western states would be thrilled at this success, but they were not amused. The new policies meant that multinational companies no longer had the easy access to the cheap labour, raw materials and consumer markets to which they had become accustomed during the colonial era.

Western powers – specifically the US, Britain andFrance – were not willing to let this continue. Instead of supporting the developmentalist movement, they set out on a decades-long campaign to topple the elected governments that were leading it and to install strongmen friendly to their interests – a long and bloody history that has been almost entirely erased from our collective memory.

It began with Iran in 1953. The democratically-elected prime minister, Mohammad Mosaddegh, was rolling out a wide range of pro-poor reforms, part of which included wresting control of the country’s oil reserves from the Anglo-Iranian Oil Company (now BP). Britain rejected this move, and responded swiftly. With the help of the CIA, Churchilldeposed Mosaddegh in a coup d’etat and replaced him with an absolute monarch, Mohammed Riza Pahlevi, who reversed Mosaddegh’s reforms and went on to rule Iran with western support for 26 years.

The following year, the US did the very same thing in Guatemala. Jacobo Arbenz – the country’s second democratically-elected president – was redistributing unused portions of large private estates to landless Mayan peasants, with full compensation for the owners. But the American-based United Fruit Company took issue with this policy, and pushed Eisenhower to topple Arbenz. After the coup, Guatemala was ruled by US-backed dictatorships for 42 years, which presided over the massacre of more than 200,000 Mayans and one of the highest poverty rates in Latin America.

Brazil, too, was hit by a US-backed coup; they deposed President Goulart for his land reforms, corporate taxes, and other pro-poor policies that western companies disliked, and replaced him with a military dictatorship that lasted 21 years. President Sukarno of Indonesia was ousted for similar policies and replaced by a dictator, who – with British and US support – killed more than one million peasants, workers, and activists in one of the worst mass murders of the century, and went on to rule for 31 years. And then of course there was Chile: the US helped depose President Allende, the soft-spoken doctor who promised better wages, fairer rents, and social services for the poor, and replaced him with a dictator whose economic policies plunged some 45% of Chileans into poverty.

Some regions never even got a shot at developmentalism, western intervention was so swift. In Uganda, Britain raised the murderous Idi Amin to power, who crushed the progressive Common Man’s Charter before it could be implemented. In the Congo, Patrice Lumumba, the country’s first elected leader, wasassassinated by Belgium and the CIA when it became clear he would restrict foreign control over resource-rich Katanga province. Western powers installed Mobutu Sese Seko in his place, a cartoonishly corrupt dictator who commanded the country for nearly forty years with billions of dollars in US aid. Under Mobutu’s reign, per capita income collapsed by 2.2% each year; ordinary Congolese suffered poverty worse than that which they had known under Belgian colonial rule.

In west Africa, France refused to cede control over the region’s resources after the end of colonialism. Working through the secretive Françafrique network, they rigged the first elections in Cameroon and handpicked the president after poisoning his main opponent. In Gabon, they installed the dictatorship of Omar Bongo and kept him in power for 41 years in exchange for access to the country’s oil.

We could rehearse many, many more examples, all the way up to the recent western-backed coups in Haiti. It is tempting to see this as nothing but a list of crimes – albeit one that casts serious doubts on the west’s claims to promoting democracy and human rights abroad. But it is more than that. It reflects an organised effort on the part of western powers to destroy the developmentalist movement that flowered in the global south after colonialism. They simply would not tolerate development if it restricted their access to resources and markets.

The legacy of this history is that there is nowgreater inequality between the west and the rest than there was at the end of colonialism. And a soul-scorching 4.2 billion people remain in poverty today. No one has been brought to justice for the coups and assassinations that destroyed the global south’s most promising attempt at development and crushed popular dreams of independence. Probably no one ever will. But we need to acknowledge that they happened, and stop pretending that the US, France and Britain are benevolent champions of the poor.