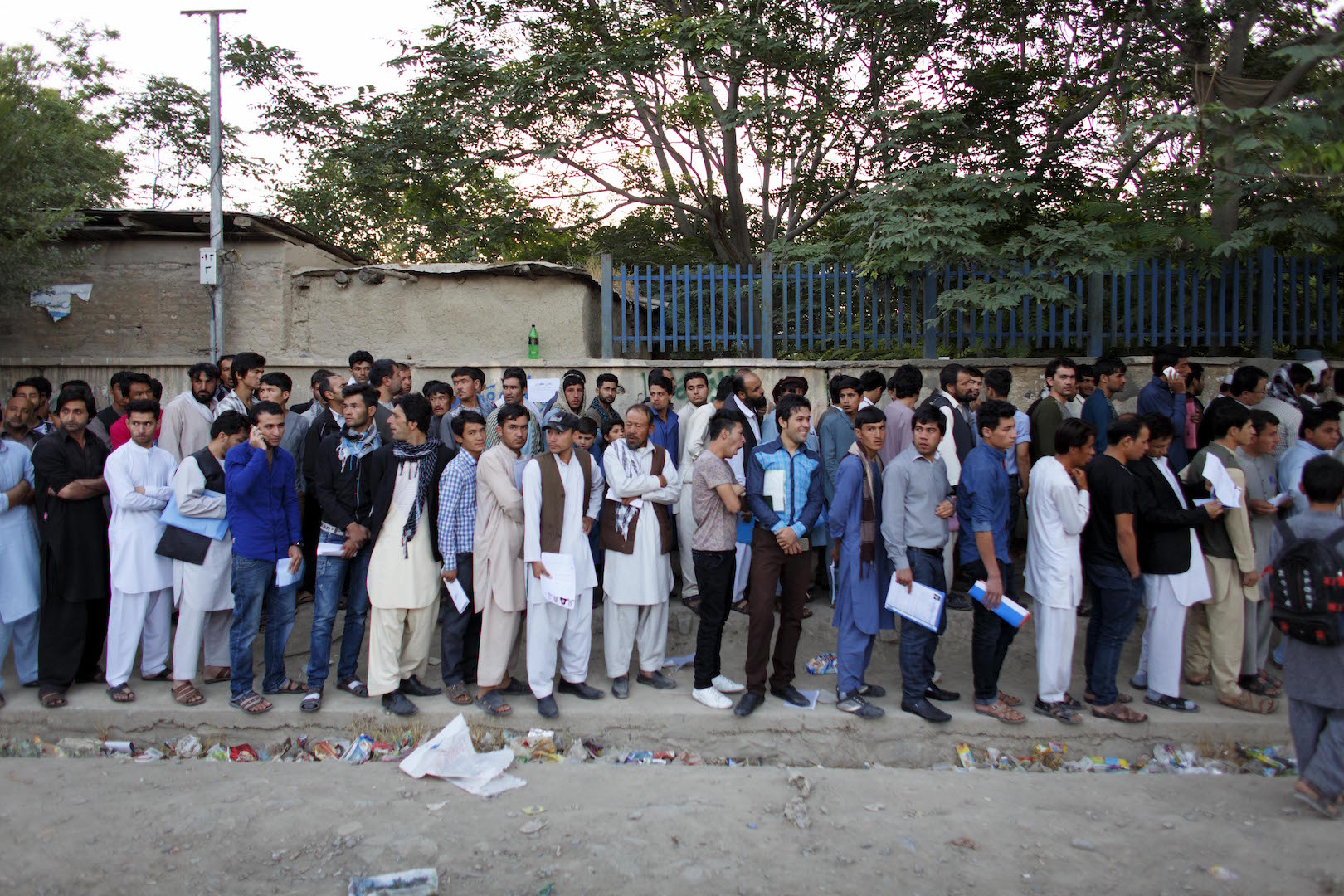 When the United States withdrew around 60,000 soldiers just over a year ago, much of the money propping up the crippled economy left with them. Their departure was part of the end of a NATO mission that at its peak included 100,000 US troops and 30,000 from other nations.

The mass withdrawal was scheduled years ago. But nobody – neither the previous Afghan government nor international donors – came up with a comprehensive plan to ease the blow of the economic shock that would surely follow.

“I have not seen anything that would indicate that we developed any programmes anticipating this tremendous negative impact on the economy,” John Sopko, the Special Investigator General for Afghanistan Reconstruction who reports to Congress on how US aid money has been spent, told IRIN.

Likewise, Afghan officials in former president Hamid Karzai’s administration seemed oblivious of the economic catastrophe that was bearing down on them.

“Not enough people grasped the meaning of it and looked at the macro and micro economic impact that it might have on Afghanistan,” said Omar Samad, a senior advisor to the current government and former ambassador to Canada and France.

“People assumed that it would be business as usual.”

It wasn’t though. Instead, a lot of business left with the Americans.

In comments included in a January report by Sopko’s office, SIGAR, President Ashraf Ghani said at least 100,000 jobs were lost in the transport sector alone, which had contributed about 22 percent of Afghanistan’s GDP. The construction sector and services connected to it had been driven by US military contracts and accounted for 40 percent of GDP.

The loss of the money flowing into the economy from jobs and contracts connected to the US military had an immediate effect. Economic growth plunged to 1.3 percent in 2014, down from an average of 6.9 percent from 2007 to 2012, according to the World Bank. The average yearly income per person fell from $730 in 2013 to $680 the following year.

IRIN requested comment from the US Agency for International Development, the State Department and the Department of Defense about the current economic crisis, the lack of preparation for it, and failures that SIGAR has uncovered with American aid projects. Only USAID responded.

“In advance of the drawdown of international troops and the 2014 election, USAID developed a transition plan to guide our support for agriculture-led economic growth, with a particular focus on supporting the Afghan government’s ability to generate the revenue needed to support the Afghan private sector,” said Larry Sampler, who works with the agency on Afghanistan and Pakistan affairs.

As an example, Sampler cited USAID’s development of an electronic payment system for customs duties on imports. Previously, payments would be collected in cash, which would then be driven to the bank in an armoured car. The electronic payments are quicker, safer and allow the government to more efficiently collect customs duties, a key source of revenue.

Sopko said many US-funded programmes were successful, but overall reconstruction has been characterised by mismanagement and waste. Such a scattershot approach has led directly to the current economic crisis. While USAID and other agencies may have had their own strategies to ease Afghanistan through the transition period, there seems to have been little coordination and no overarching plan.

The US alone has pumped at least $113 billion in reconstruction aid into Afghanistan since helping to overthrow the Taliban at the end of 2001, according to SIGAR. That does not include having the US military on the ground fighting, which would bring the cost to almost a trillion dollars, but it’s more than America spent on the Marshall Plan to rebuild Europe after the Second World War.

Despite that staggering investment, Afghanistan in 2016 looks nothing like West Germany 14 years after the end of the Second World War. So what went wrong?

Quite a lot, as it turns out.

SIGAR has published a series of reports exposing waste, corruption and mismanagement of programmes led by USAID, the Department of Defense, and the State Department.

They include an investigation into the DoD spending $486 million on cargo planes for the Afghan Air Force, which found that “those aircraft could not even meet operation requirements in the Afghan setting”. Eventually, 16 of them were sold for scrap metal at six cents a pound, fetching $32,000.

Another investigation showed that the DoD’s Task Force for Business and Stability Operations spent almost $150 million on housing for staff members who oversaw “unfinished, poorly planned, and ill-conceived projects”. They included a $6 million plan to import nine Italian goats to stimulate a cashmere industry. The Task Force has been disbanded and the fate of the goats remains unknown.

Not all projects were failures, of course, and there’s no doubt that Afghanistan’s economy is better off now than it was under the Taliban. But the overall approach to rebuilding Afghanistan was haphazard, say insiders.

“There were problems with aid being asked to be spent too quickly, and too much of it, and not directed at the longer term,” said Bill Byrd, who was country manager and economic advisor at the World Bank in Afghanistan from 2002 to 2006 and is now with the United States Institute for Peace.

Byrd and others, including Samad, said donors neglected the key sector of agriculture, as well as other important areas like water management and infrastructure development. Samad said the main focus had been on security, while development planning was “erratic”.

“Every year, or every other year, everybody got together and changed course, changed priorities,” he said. “We were not very consistent with follow-up and implementation.”

That lack of focus meant that some sectors of the economy and some people benefited greatly, while others were left behind. A World Bankreport shows that the poverty rate stayed at 36 percent between 2007 and 2012 even as there was strong economic growth, including an astonishing 21 percent in 2009. Instead of raising living standards for the majority of Afghans, inequality increased.

It’s not all bad news. The World Bank predicts economic growth to rise steadily for the next few years. There have been major successes in health and education, as well as training and equipping the Afghan military, which is now facing a rising insurgency from not only the Taliban, but from other groups including the so-called Islamic State.

Worsening security is feeding the economic crisis, and fractures in the government are not helping, said Byrd.

Afghanistan’s National Unity Government was created as a way out of a political crisis, after the disputed results of 2014 elections threaten to tip the country into another armed conflict. The UN oversaw an extensive audit, but the results were never made public. Instead, Ghani was appointed president, while the new position of Chief Executive Officer was created for his challenger, Abdullah Abdullah.

“It seemed almost like the NUG agreement was a recipe for inaction, and that is a problem,” said Byrd. “The National Unity Government needs to act more like a unified government that’s responding to what by consensus is a national emergency.”

There are indications that the NUG can be decisive. Byrd pointed to the government’s success in getting tax hikes approved by parliament and improving tax collection, which increased government revenue by more than 20 percent last year.

“I think it’s an example that its not impossible for the government to function and it achieved a credible and significant success,” he said. “The situation would have been worse if the hemorrhage of revenue had continued in 2015.”

Samad said it’s impossible to disentangle poor security and governance from the economic crisis, and improvements in those fields are key. He downplayed divisions in the NUG and pointed to Ghani’s widely heralded commitments to fighting corruption, as well as efforts by the government to create political space for peace negotiations with the Taliban.

Even if the government’s anti-corruption strategies and peace negotiations are successful, it won’t be any time soon.

Voting with their feet

Many Afghans have grown tired of waiting for things to get better. Instead, they are leaving the country in higher numbers than at any time since the Taliban. Afghans comprise the second largest number of arrivals in Europe after Syria, making up almost a quarter of asylum claims, according to the UN refugee agency, UNHCR.

The Tahiri family, for instance, is packing up shop and heading to Europe – anywhere in Europe – despite the considerable costs and dangers.

Standing outside the central passport office in the capital, Kabul, Ahmad Tahiri (not his real name) explained that sales at his fabric shop have been so slow over the past year that he can barely support his wife and three children.

“Now we have come to a conclusion that if we stay things will even get worse,” said his younger brother, Abdullah. “That’s why we will spend everything we have to reach a better place – if not for us at least for our next generation.”

(Nisar Ahmad contributed reporting from Kabul. Cover photo: Afghans line up at the central passport office in Kabul in August 2015)