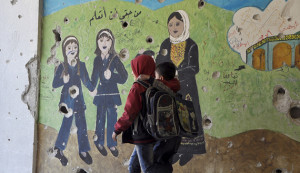 Children walk beside a painted wall inside Jarmaq school in Yarmouk camp April 14, 2015. The text on the wall reads in Arabic “It’s my right to learn.” Picture taken April 14, 2015. REUTERS/Moayad Zaghmout – RTR4XFMX

Despite the cruelty of the war in Syria, community-based initiatives emerged from the pain from which society is suffering. As international initiatives crowd to resolve the intractable crisis, Syrian youth keep their initiatives on the local level without getting into politics and its ramifications. They focus on the people’s concerns and needs.

International news agencies and newspapers rush in with their cameras to capture scenes of the war in Syria to report on the daily news and events. However, Peace Lens is an initiative not related to the world of news, but based on documentary filmmaking.

The initiative’s team believes documentary filmmaking conveys the reality as it is through the camera lens and turns this reality into a series of pictures and scenes, to encourage the viewers to agree with a particular opinion or do a certain thing.

Documentaries are the most important tools nowadays, not only for their ability to influence the current situation. They can be used in the future as a deterrent for future generations, preventing them from entering into conflicts after seeing the amount of suffering resulting from the current conflict in the country.

The initiative’s team quotes Mikhail Kirkorov, a professor at the Petersburg State University of Film and Television, who said, “Syria is now the most important theater in the world for the documentary industry.”

Bashar al-Majdalawi, an official in the initiative, explained the project’s objective and work process: “The initiative was presented to the United Nations Development Programme. It is a cultural art project that brings together a group of people interested in filmmaking. They are taught how to shoot documentary films to convey social problems.” He added, “It is called Peace Lens because we wanted to link between documentaries and peace in light of our current situation.”

Majdalawi said, “A lot of things must be highlighted. We selected 10 young people, from different [social] categories, from the 40 people who applied for the course, according to UN standards and those of the project’s organizer. They were gathered in one place to brainstorm for a comprehensive idea for all the people in Syria to highlight peace.”

“At the end of the workshop, the film is shot and marketed — whether at festivals or special screenings — or posted on social networking sites, in order to make viewers think of solutions for the problems we are facing. We only put the problem in the spotlight, we do not give solutions,” he said.

Majdalawi added, “Such work could help the people we put in the spotlight in getting the support they need from organizations and institutions that care about them.”

Peace Lens organized two workshops for four months in two provinces, where a group of interested and talented people are trained for documentary filmmaking: writing texts, shooting and editing. After the workshop is done, two documentary films are made on cases of peace in the two provinces. The next phase would be to have a big screening for the documentaries in order to sell them. The proceeds of that money would be used to support families affected by the conflict.

It may be strange, and even undesirable under the shelling and the need for safety, to hold a book by Lebanese novelist Amin Maalouf and offer it to a family affected by the war.

The Book Initiative was launched by a team dubbed “A drop of Ink” in Damascus. The person in charge of the group, Youssef Sabbagh, said, “I first thought of how to encourage people to read.”

He added, “The idea is based on the establishment of a study with the various books, while focusing on those that are interesting for the youth and children. This is because this age category is important in building a better country, since they are the ones who engage in violent acts. Reading builds a human being that is balanced, honest and less violent — a person that has a weak culture of violence and higher prospects.”

On the importance of the initiative, Sabbagh explained, “One of the advantages is that online reading is prevailing, which is not wrong. The problem is that we do not know whether the sources are reliable. We tend to acquire a part of a certain idea without being aware from which book it comes. The initiative is a contribution to prove that the Syrian mind is the product of a well-established ancient civilization and is capable under the most difficult circumstances to move away from the culture of revenge.”

On the implementation of the initiative, Sabbagh said, “This study is placed in cafes, schools, cinemas, universities, centers and shelters. They consist of medium-sized studies that can be manufactured by local carpenters and includes diverse books. The idea was discussed at more than one level. Some have supported it and others considered that it is not the right time to read. I finally made the suggestion to the United Nations Organization for Refugees, which kept the door open for initiatives. A team of four members was made, and this is how ‘A Drop of Ink’ was formed.”

Sabbagh explained, “Work is currently underway in two parts. First is placing in specific places, where anyone can read a book without any fees. Second is about not contenting oneself with reading. In the care center in Dweil’a in Damascus, a library was established, composed of a variety of books for children and adolescents. We focus on the youth, because we have the ability to continue working with them until they get older. The next plan is to establish a library in shelters, as they accommodate affected families.”

On the idea that it is not the right time for reading, Sabbagh said, “Nothing justifies abstaining from reading. Education at home and schools is intrinsic. Reading builds [the youth] psychologically. We are not calling for giving reading a priority over the daily needs such as eating and drinking. But could it be possible to not have time to read?”