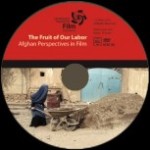 A selection of films from The Fruit of Our Labor-Afghan Perspectives in Film are screening at the 3rd Annual Afghan Documentary Film Festival in Stockholm, Sweden, December 11-13.

The films include Beyond Fatigue, by Baqir, Searching for a Path, by Reza, Death to the Camera, by Qasem, ‘L’ is for Light, ‘D’ is for Darkness, by Hasibullah and Bearing the Weight, by Mona. Congratulations to the filmmakers and to the festival organizers Basir and Amazon.