Each day an estimated 7,000 Afghans apply for passports 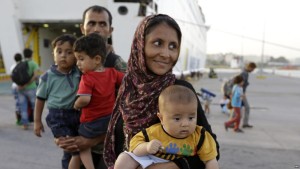 A family from Afghanistan arrives from the northeastern Greek island of Lesbos to the Athens’ port of Piraeus on Monday, Sept. 7, 2015. Photo: AP

Afghans do not apply for passports unless they intend to travel outside the country since they do not use passports for identification at home.

That means more than 200,000 Afghans plan on leaving the country each month — a sudden and dramatic increase.

The head of the Afghan passport distribution directorate, General Sayed Omar Saboori, told VOA the directorate’s central and provincial offices have the capacity to provide only 2,500 passports on a daily basis.

“The system was primarily designed for 1,000 passports countrywide, but in recent months because of the rising demand, we are working both shifts,” said General Saboori. “Thousands of applicants wait all day long, and we can only do so much to meet the rising demand.”

Right now, Afghans are the second largest group — behind Syrians — waiting on the shores of Europe, hoping to embrace a new life on the continent.

According to Babar Baluch of United Nations Refugee Agency (UNHCR) in Hungary, of the 140,000 people who sought asylum in Hungary alone this year, 40,000 of them are Afghans.

“[And most arrive] in ships that can easily capsize because of the overload and a lot of them did, resulting in the tragic death of countless people who drowned in the ocean,” he said.

Zalmai Rasooli, who lives in northern Parwan province, experienced this journey himself.

“Two years ago, I decided to leave the country and reach Europe,” he said. “I went through Iran and Turkey and reached Greece after months of travel and tremendous amount of hardship. I was caught at the border of Greece and deported back to Afghanistan.”

Rasooli recalls seeing a boat capsize. To this day he’s convinced none of its 40 refugees could have survived.

But that immense risk will not deter him from making the journey all over again.

Afghanistan, he says, doesn’t have anything to offer him, and he plans to leave the country soon.

On Monday, hundreds of Afghans took to the streets in the capital, Kabul, to protest against the rising unemployment in the country. Protestors were complaining about the lack of employment opportunities and warned of “mass exodus” if the government fails to address the issue.

“If the unemployment issue is not addressed, we will soon witness an empty Kabul,” said Sharif, a protestor, who like many Afghans goes by only one name.

Over 60 percent of Afghans are aged 18-25, making Afghanistan one of the youngest countries in the world.

The Afghan government acknowledges the seriousness of unemployment in the country. Spokesperson for the Ministry of Labor and Social Affairs, Ali Eftekhari, told VOA the government is working on short and long-term projects to address unemployment.

“In the long-run, we will provide enduring employment opportunities for Afghans through building economic infrastructures in the country, but in the short run, we are in discussions with a number of Arab countries that are in need of workers,” he said.

Opportunities for the educated

Hanif Sufizada, a Fulbright scholar who graduated from Cornell University’s Institute of Public Affairs, paints a rather bright picture of opportunities in Afghanistan.

“After graduating from Cornell University in public administration, I came back to Afghanistan to join a newly established National Unity Government because of ample employment opportunities in the area of my specialization,” he said.

One of the 450 Afghan Fulbright scholars who came to the U.S. for education, Sufizada said that some fellow scholars, pessimistic about the direction their country was headed in, chose to remain in the U.S. upon the completion of their degrees. Others returned and are working in various sections of the Afghan government.

Despite the situation of youth in Afghanistan, thousands are employed by the Afghan government and international organizations.

But a young society can be a double edged sword. Employed, young people contribute to the country’s economy; unemployed, they can be a force of instability. As one of those who took part in Monday’s protest in Kabul said, “It’s unemployment that pushes Afghan youth to join the insurgents or use drugs.”