Development: World has not woken up to water crisis caused by climate change – IPCC head 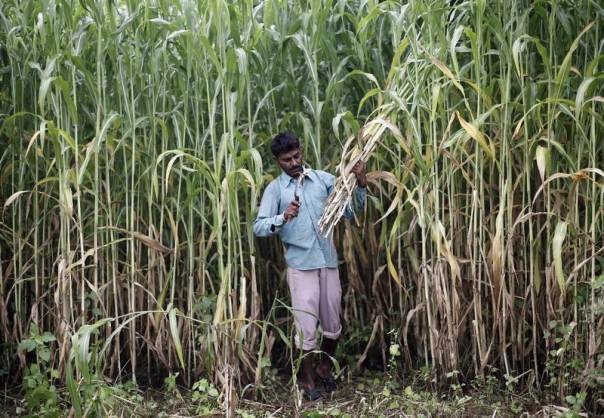 A farmer removes dried grass from his sugarcane field in Muzaffarnagar, in the northern Indian state of Uttar Pradesh, which is on the verge of drought because the monsoon rains are several weeks late. Picture July 19, 2014. REUTERS/Anindito Mukherjee

NEW DELHI (Thomson Reuters Foundation) – Water scarcity could lead to conflict between communities and nations as the world is still not fully aware of the water crisis many countries face as a result of climate change, the head of the U.N. panel of climate scientists warned on Tuesday.

The latest report from the U.N. Intergovernmental Panel on Climate Change (IPCC) predicts a rise in global temperature of between 0.3 and 4.8 degrees Celsius (0.5 to 8.6 Fahrenheit) by the late 21st century.

Countries such as India are likely to be hit hard by global warming, which will bring more freak weather such as droughts that will lead to serious water shortages and affect agricultural output and food security.

“Unfortunately, the world has not really woken up to the reality of what we are going to face in terms of the crises as far as water is concerned,” IPCC Chair Rajendra Pachauri told participants at a conference on water security.

Development experts around the world have become increasingly concerned about water security in recent years.

More frequent floods and droughts caused by climate change, pollution of rivers and lakes, urbanisation, over-extraction of ground water and expanding populations mean that many nations such as India face serious water shortages.

In addition, the demand for more power by countries like India to fuel their economic growth has resulted in a need to harness more water for hydropower dams and nuclear plants.

The dry months of June and July, during which there are frequent power cuts and water shortages, offer a snapshot of the pending water crisis in India.

Hospitals in New Delhi cancelled surgery at one point in 2013 because they had no water to sterilise instruments, clean operating theatres or for staff to wash their hands. Upmarket shopping malls selling luxury brands were forced to switch off air conditioners and shut toilets.

Pachauri said it was necessary to bring in technology to help harness water more efficiently, particularly in agriculture where there is a lot of wastage.

“Naturally, this (water crisis) is also going to lead to tensions – probably some conflict between riparian groups and riparian states,” he said.

India, as both an upper and lower riparian nation, finds itself at the centre of water disputes with its eastern and western downstream neighbours – Bangladesh and Pakistan – which accuse New Delhi of monopolising water flows.