Haiti: Who Owns What in Haiti? 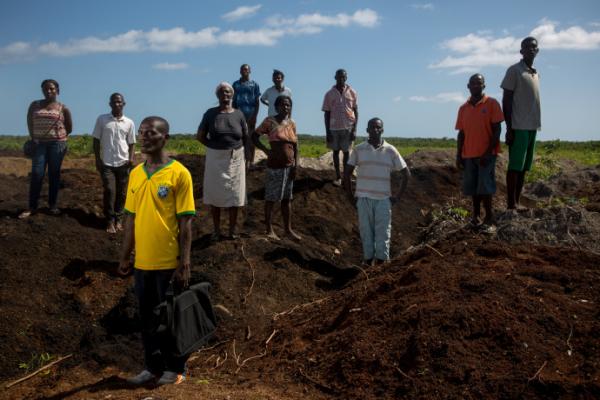 Farmers on their expropriated land on the Haitian island of Île-à-Vache. Image by Allison Shelley. Haiti, 2015.

The island of La Tortue, off the northern coast of Haiti, has become best known as a place where Haitians facing hard times set sail for lot bo dlo—the other side of the water. When President Jean-Bertrand Aristide was first ousted, in 1991, the U.S. Coast Guard intercepted and repatriated some eighteen hundred “boat people” who had fled Haiti’s north coast en route to South Florida. Recently, though, one British-American company has been working to bring large numbers of people in the other direction, from South Florida to La Tortue. In July, Carnival Corporation, the cruise-ship company, signed a memorandum of understanding with the Haitian government, which would allow a port to be opened on the island’s Pointe-Ouest beach, to serve as a stopover for its Caribbean ships. Haitian officials claimed that the development would create two thousand jobs, and would represent a major step forward in a plan for tourism to propel the nation’s economy. Five years after an earthquake caused an estimated $8.1 to $13.9 billion in damage—more than the country’s G.D.P. at the time—Haiti remains plagued by chronic underemployment and poverty.

The port deal is now at risk, however, because the ground onto which Carnival’s passengers would disembark may not have been the government’s to offer. In 1970, François (Papa Doc) Duvalier, Haiti’s President at the time, agreed to lease much of La Tortue to a Texas businessman named Don Pierson, with the aim of creating a free port; Pierson’s son, Grey, now holds the lease. The contract gave Don Pierson’s company a ninety-nine-year lease, and specified that he would develop the island’s infrastructure for tourism. Though Pierson soon began signing deals to that end, including one with Gulf Oil, for three hundred million dollars, the development project never got off the ground.

Occasionally, Grey Pierson says, Haitian officials would “rediscover” the project, and, in 1998, two years after his father’s death, a delegation came to Dallas to see him. As he tells it, he put up the Haitians at the Loews Anatole and held a meeting with them at the offices of the Texas Rangers’ ballpark. He told them that his father had procured four hundred million dollars in commitments to La Tortue. Leslie Voltaire, an architect and urban planner who was serving as the adviser on infrastructure and urban planning to René Préval, Haiti’s President at the time, was present at the meeting; Voltaire recalls that Pierson wanted the four hundred million dollars in compensation. (Pierson denies that.) The discussions went no further.

“I think that Carnival didn’t know that,” Voltaire told me, referring to the 1970 deal with Pierson. “If Carnival sees that there is that land issue, they won’t come.” Carnival confirmed to the Miami Heraldthat it did not learn of the dispute over ownership until several months after signing the agreement. (The newspaper further reported that yet another entity, Hotel Mont Joli SA, holds a lease on Pointe-Ouest.) Pierson, for his part, says that he has not been contacted by Carnival or Haitian government officials regarding the matter.

Similar uncertainty over land ownership has played out across Haiti as the country attempts to attract foreign investment in tourism, mining, manufacturing, and agriculture—often without clear knowledge of who, precisely, owns what. The country’s present difficulties with land ownership are a function not only of its twentieth-century dictators but of Haiti’s history as a former slave colony. After achieving independence, in 1804, former slaves discovered that the land they had taken from their owners would not be theirs to keep. The country’s revolutionary leaders, Jean-Jacques Dessalines and Toussaint Louverture, thought it best for land to be held in large swathes, by the state. “Having survived the brutality of the slave system and then the violence of the revolution, the ex-slaves strongly believed that the land should be theirs; land ownership would give freedom its full and true meaning,” the historian Laurent Dubois writes in “Haiti: The Aftershocks of History.” But the early debates over who would control Haitian territory “revolved only around the question of which group of elites would profit from Haiti’s new order—not what that order would look like.”

“Now there is a fight between the Haitian bourgeoisie and peasants who want to control the land,” the Haitian sociologist Bernard Etheart told me. The tension played out over the past two centuries with governments often bequeathing parcels of land to various groups, only sometimes to take them back later, subsequent disputes over territory, and little regard for formal title throughout. Peasants in rural Haiti generally worked the land under an informal system of tenancy, in which they established de-facto ownership over small plots of land, then joined their plots with their neighbors’, usually members of their extended families, and farmed the land collectively. The land would typically remain under the name of just one family member—but no records of these arrangements were provided to the state.

Many people have sometimes claimed to own the same parcel of land, while other plots of land had no identifiable owner. Cases in which title could be established are rare (though Etheart traced one going back to Spanish colonial times). A 1997 study, conducted by the U.N. Food and Agriculture Organization and Haiti’s agriculture ministry, estimated that ninety-five per cent of all land sales in rural Haiti had been conducted without going through legal formalities.

In the wake of the massive earthquake that struck on January 12, 2010, resolving long-standing land-ownership issues has been a low priority for Haiti’s leaders, even as they regard tourism, mining, and other industries affected by questions of title as crucial to the island’s economic development. France is helping to fund Haiti’s land-management office, but the Haitian government hasn’t allocated the resources it would take to create a national cadastre (a survey of the country’s land). Joab Thelot, a coordinator for the National Office of the Cadastre, says that it wouldn’t take much—just three million dollars a year—to pay the salaries of trained surveyors and buy the vehicles they would need to get around. In recent years, though, Haiti’s parliament has allocated his office just a third that amount.

Indications from Haitian officials regarding how they will handle the uncertainty over ownership have raised further concerns. In addition to the Carnival case, in August, 2013, President Michel Martelly’s government, which had come to power two years earlier, announced a major investment on the small island of Île-à-Vache, aimed at turning it into a tourist destination. A few months earlier, the government had published a decree meant to establish that state-owned land on the island could be used only for tourism and public utilities. The announcement may have been intended to avoid the kind of embarrassment that the government later experienced with Carnival. The hundreds of people who had been farming and living on Île-à-Vache for generations responded by staging protests, which haven’t halted construction.

As Martelly pushes ahead with his development agenda, he has given few indications that he intends to address the pervasive issues relating to land ownership and insecurity that have undermined development in Haiti for two hundred years. On Tuesday, the day after the fifth anniversary of the earthquake, a deal to set terms for new elections fell apart and the country’s parliament dissolved, leaving Martelly to rule by decree. The latest bout of political turmoil makes it even less likely that Haiti will be able to address the basic conflicts over land that threaten to inhibit the island’s economic development.

ON HAITI, ON THE MEDIA | Haiti: Covering a chaotic nation, with deadly consequences

“‘Haiti is a minefield,’ said Harold Isaac, a journalist based in Port-au-Prince who works for the Associated Press. ‘The minute you start reporting news, there are so many threats, because it casts light on people that don’t necessarily enjoy that.’”

ON HAITI, ON DEVELOPMENT | Can Haiti rebuild a food system broken by disaster, historical injustice, and neglect?