Press Coverage: “Handing Over the Camera”

A full PDF version of the original Connecticut College Magazine article can be found here. 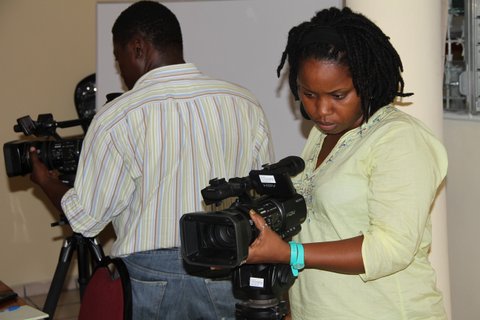 Since being struck by a devastating earthquake in 2010, the Caribbean nation of Haiti has been portrayed by the domestic media as a land of struggle and poverty, where help from the outside is the Haitian people’s only hope.But documentary filmmaker Michael Sheridan ’89 knows there is another story. Haitians are starting their own initiatives to recover, and Sheridan wants them to tell their stories in their own unique way. To do that, he is turning the typical documentary style on its head.Sheridan, the founder and director of Community Supported Film (CSFilm), is training Haitian storytellers in the production of 10 short films that will focus on the causes of and solutions to the economic and social development challenges Haiti has faced since the earthquake. 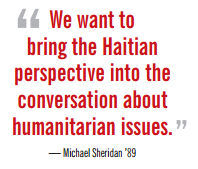 Sheridan founded CSFilm in 2010 and completed a similar film project in Afghanistan that same year. “The Fruit of Our Labor: Afghan Perspectives in Film” was awarded

the $10,000 Promotions Prize at the International Short Film Festival in Switzerland and has been discussed in forums across the United States, from town halls to the halls of Congress.

Sheridan says he came up with the idea for CSFilm to fuse his interests in teaching and filmmaking, while also helping local people take control of the stories being told about their economic and social development challenges. “I realized that if we really wanted to understand the plight of others or help them, we needed to understand the problems and solutions from their perspectives,” he says.

His passion for advocacy was developed during his college years — or, perhaps more accurately, between college years. Having grown up working in the theater, Sheridan took a sabbatical from college after his junior year to embark on a two-year independent study of the theater of other cultures. The two-year trip turned into a seven-year journey through Europe, during which he found himself deeply immersed in social and political movements.

After returning to Connecticut College to complete his senior year in 1989, Sheridan took a job at the international development organization Oxfam America in Boston. It was there that he partnered with a colleague on a documentary about poverty in Guatemala and began to focus on filmmaking. His work has appeared on PBS, ABC, TLC and Discovery Channel.

In 2013, Sheridan took part in TEDxConnecticutCollege, where he discussed media consumption and its impact on how we see situations faced by others. “We all have to demand an improvement in our news diet — a balanced diet that is less self-centered, that includes local perspectives, and would help us be better informed,” Sheridan told students.

Vice President Harris and Dr. Biden: Your Silence on Afghan Women Is Deafening

What we should be shocked about is the near-silence here in the United States from Vice President Kamala Harris and First Lady Jill Biden — arguably America’s most powerful women — I ask the former prosecutor Ms. Harris and the current professor Dr. Biden: Where are your outspoken voices on justice and education for the women and girls of Afghanistan?