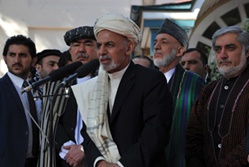 In its latest report, Afghanistan’s Political Transition, the International Crisis Group examines the politics surrounding the deeply contested 2014 presidential election, analysing threats and opportunities. Any election during an escalating civil war will never reflect the full breadth of popular opinion, and the polls were marred by substantial fraud. Still, the most peaceful transfer of power in Afghanistan’s history creates opportunities to improve governance, reduce corruption and steer the country toward greater stability.

The report’s major findings and recommendations are:

“Ghani and Abdullah will need to continue serving as voices of restraint as they strive to make the unity government function, and they deserve to receive international support in these efforts” says says Graeme Smith, Afghanistan Senior Analyst. “The Afghan government cannot afford to drift, and any disunity in Kabul will affect the country’s ability to fight its battles and pay its bills”.

“While the two candidates’ power-sharing deals may be imperfect, they have also opened a conversation about revising the overly centralised presidential system”, says Samina Ahmed, South Asia Project Director and Senior Asia Adviser. “Afghanistan needs constitutional reforms to dilute some powers of the presidency and give more responsibilities to elected local officials. This would help mitigate factional tensions in the government and lower the stakes in future elections”.