Posted by: Deepa Panchang on Septemeber 15th, 2014
By Other Worlds and the Solidarity and Resistance Collective for the Population of Île-à-Vache

“Destination Île-à-Vache” is a government-driven tourist project planned for a small island off the northern coast of Haiti, Île-à-Vache. Plans include an international airport, golf courses,1,500 hotel bungalows, agri-tourism, and “tourist villages” which will include boutiques, restaurants and even a night club. Groundbreaking on the project occurred in August, 2013, without the inclusion or participation of the community.

Once the construction on the road began in late 2013, the community began to peacefully protest and formed a local group in December, 2013 called KOPI (Collective for Île-à-Vache). In response, the government has coerced, repressed, and intimidated the population. A leader of the resistance movement has been a political prisoner – imprisoned without charge or trial – since February 24. The details of some of these acts are included in the declaration below.

The declaration, signed by members of grassroots Haitian organizations, was circulated to local press at the end of August 2014. 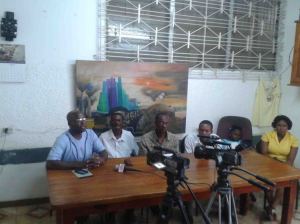 Representatives from the Collective and KOPI (of Île-à-Vache) and family members of imprisoned Lamy speak to the press. Photo by: Jessica Hsu

We, the signatory organizations of this [declaration], explicitly denounce the Martelly/Lamothe government’s maneuvers to repress the population of Île-à-Vache and grant investors free reign on the island.

We want to remind everyone that on May 10, 2013, the Martelly/Lamothe government issued a decree that Île-à-Vache was to be designated for tourism development and public utility, effectively pitting the population of Île-à-Vache against the government in a David-Goliath scenario. Since then, the islanders have watched politicians and businessmen land at Île-à-Vache with police escorts, to implement the first phases of the project in people’s own fields and yards all over the island.

On December 27, 2013, the population stood up and demanded a thorough explanation of the tourism development plan. The powers that be responded with lies of all sorts, repression, persecution, threats, and arrests of resistance leaders, among whom Jean Mathulnès Lamy has been sitting in prison since February, 2014. It does not take a genius to be suspicious of such “development” that takes place under repression, arbitrary arrests, intimidation, militarization, and threats. Since the government seems to envision displacing the whole island’s population under the May 10, 2013 decree, who will this development really serve?

Prime Minister Lamothe visited Île-à-Vache from June 27-30, 2014 under the pretext of supervising the advancement of various tourism projects. But the real objective of the visit was to continue the flow of lies, propaganda, and support for the machine of repression on Île-à-Vache. To prepare for this visit, the state promised households 10,000 gourdes (approximately US$220) each to help finance microbusiness [if they came to] Lamothe’s public meeting. People did receive something for coming out, but it was far from the 10,000 gourdes they were promised. When people arrived, they received bags of rice, cans of oil, and candy from the hands of Lamothe and his people. After the visit there appeared 20 motorcycles without plaques, cell phones which allowed for the state to maintain surveillance on the population, more police and military personnel, three new police cars, and three new judges. The government commissioner was replaced.

On top of that, police visited members of the Peasant Organizing Collective of Île-à-Vache (KOPI) at their homes, with arrest warrants in hand. Most importantly, the inhabitants of Île-à-Vache no longer feel safe because of a number of members of the Haitian National Police, specifically the UDMO [the Department Unit for the Maintenance of Order], who are circulating the island heavily armed, and intimidating the populace. This has continued despite the numerous human rights violations that organizations have already documented on the island.

Moreover, on August 14-15, 2014, while most people were celebrating [at the annual patron saint celebration] on Gelée Beach, the government created a phantom organization called MPDI [Farmers’ Movement for the Development of Île-à-Vache] whose head is a former director of KOPI that the government has since bought off. The government then promised the organization $1.5 million gourdes [about US$34,000] to fund its activities. Lots of talk, little action.

What is really happening on this island? It’s just one of the many programs happening all over that is touted with empty promises like Ti Manman Cherie [Dear Mother, a component of the national assistance program “Ede Pep”, or Aid the People, established by the Martelly-Lamothe Administration], streetlamps, new jobs, handouts of money, etc from the Minister Against Extreme Poverty, Roseanne Auguste. All this is being shoved down the throats of the people. The only positive thing that has happened has been the construction of a police station and housing for Dominican workers.

Île-à-Vache was once a region covered in beautiful vegetation. These projects are blindly destroying a huge number of natural resources that the island’s inhabitants depended on to live. The projects are laying waste to the environment. No serious study was conducted prior to the demolition and clear-cutting of the forests, and now officials are realizing that the spot they envisioned for the airport is not appropriate. They have since chosen a new location to tear up in the heart of the island, according to the testimony of many of the inhabitants. This is a clear violation of articles 253 and 254 of the Constitution of Haiti. [Article 253: Since the environment is the natural framework of the life of the people, any practices that might disturb the ecological balance are strictly forbidden. Article 254: The state shall organize the enhancement of natural sites to ensure their protection and make them accessible to all.] This situation will continue to create tensions on the island.

In light of all these facts, the Collective for Solidarity with the Île-à-Vache Peasants’ Struggle supports all forms of grassroots mobilization and community organization and reminds the population to stay vigilant. We, the signatory organizations of this [declaration], demand that the government cease all forms of propaganda, intimidation, repression, and violation of human rights on Île-à-Vache.

At the same time, the Collective reminds the government of the demands of the people:

– Retract the [May 10, 2013] decree that is being used as a justification to confiscate peasant lands on Île-à-Vache;

– Unconditionally release Jean Mathulnès Lamy, a native of the island unjustly held by the state for the past seven months for his involvement in peaceful protests (a right he retains) concerning the tourism development plan. [A well-respected leader and president of KOPI, Lamy was arrested and has been detained at the National Penitentiary without seeing a judge. The initial reason given for his arrest was his role in organizing a protest on the island on February 7, 2014.]

– Recall all UDMO and other police forces that have been recently stationed on the island.

On behalf of the Collective:[Solidarity and Resistance Collective for the Population of Île-à-Vache]

Translated by Nathan A. Wendte