Original article can be read at: IRIN 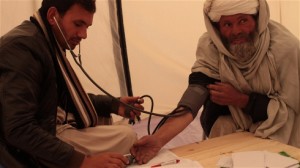 Photo: John James/IRIN
Reaching the needy is a challenge

“In almost every district where security has been handed over from ISAF [NATO-led International Security Assistance Force] to Afghan security forces we’ve seen an increase in attacks,” Omar Hamid, head of Asia Analysis at IHS Country Risk, told IRIN. “The writ of the government to provide security to aid agencies is reduced and there’s a risk that the situation will only get worse as the political instability increases.”

Disputed elections and the imminent pull-out of ISAF forces is compounding an already difficult situation for aid workers.

“In terms of fragmentation [of the country], it’s getting increasingly similar to the 1980s and 90s,” said Arne Strand, from Norway’s CMI development research institute, the author of a recent Chatham House briefing paper on innovative aid delivery.

“More serious NGOs will probably remain: they have the knowledge and dedication of staff. But monitoring capacity will need a boost in the current environment. These direct links are vital, and a kind of control on your own staff – you need to have those kinds of control mechanisms.”

The evidence in this year’s Humanitarian Needs Overview is that areas with the greatest need often have the fewest humanitarian actors. With the overall aid package to Afghanistan anticipated to drop, this year’s tightly-focused humanitarian appeal for US$406 million (currently 56 percent funded) attempts to shift work towards the areas of greatest need.

The eastern province of Nuristan on the border with Pakistan is a case in point. State control is limited and there are few aid workers despite needs judged “high level” in nutrition, water, sanitation and hygiene (WASH), and health, by the UN Office for the Coordination of Humanitarian Affairs (OCHA).

The infrastructure is poor with four separate valleys lacking direct road connections between them. Those roads that are usable can be blocked by snow for long periods in winter. International aid sometimes has to be delivered by donkey. Humanitarian convoys have been attacked, and the government’s disaster management authority, ANDMA, is “reportedly non-existent” on the ground, according to the OCHA overview.

The only international NGO with a stable presence in the area is the International Medical Corps (IMC), while the Afghan Red Crescent is the main local actor.

To face the future security challenges, analysts suggest a range of measures, from negotiating with a broader set of stakeholders, to using cash-transfer schemes, remote management, third-party monitoring, and having a greater tolerance for risk, allied with risk mitigation measures.

With the withdrawal of international forces, more of the fighting is now between Afghans themselves. Security analysts predict that this will mean more intense combat, more casualties, and less access for humanitarians. Potential power vacuums after withdrawal may also increase criminality.

The mid-year Protection of Civilians in Armed Conflict report from the UN Assistance Mission in Afghanistan showed a 24 percent rise in civilian casualties on the same period last year.

“This year has been one of the worst since the conflict started: It’s definitely not getting better, and that’s obviously a concern,” said Alexander Buchmann, head of mission for Médecins Sans Frontières (MSF) in Afghanistan. “Access is not improving for patients needing to get to health centres or for aid actors to get to those needing help. What is clear is that things are not getting better and at best things have stabilized at a very high intensity of violence.”

Where local power holders are anti-government actors, humanitarians find themselves in a difficult position – do they negotiate and risk the ire of the state? Discussions and even agreements with such groups can inadvertently mean giving them legitimacy.

“We need to be thinking ahead and talking to the other side,” one international aid worker, who asked not to be named, told IRIN in the eastern town of Jalalabad.

While large humanitarian organizations may have the potential to reach out to key leaders, that is not something that is possible for all, especially with shifting leadership structures. “It’s not realistic for [a] small organization to go to Quetta [in Pakistan, an important base for the Taliban leadership],” said a protection specialist in Kabul. “Anyway, lower level commanders are not necessarily in contact with the overall leadership. Showing a letter from [Taliban leader] Mullah Omar might not even go down too well with these guys.”

Anti-government forces are not necessarily opposed to humanitarian interventions, especially in particular sectors like health.

“We talk to all parties to the conflict and try to guarantee safe access for patients,” said MSF’s Buchmann. “There’s a general acceptance of the idea, but it varies on the ground in the application.” MSF has long-standing projects in places like Helmand, but Buchmann says the key challenge is getting out of provincial centres to address needs in distant districts.

Many provinces contain a shifting scene of local warlords, commanders and tribal alliances. Nuristan itself has 7-8 separate armed groups with different agendas. This is where the knowledge of local NGOs can be particularly useful. Muslim NGOs are also seen as a possible way to gain greater acceptance for humanitarian work.

But aid workers stress that it is not just about educating people on humanitarian principles; you need to also show that you can deliver. “Services buy access”, one aid worker told IRIN in Jalalabad.

Communities and their leaders have long been a favoured route for gaining access.

“People ask us how we manage to work in areas that are not nominally under government control,” said Nigel Jenkins, former country head at the International Rescue Committee (IRC), which has run programmes in the country since 1988. “The simple answer is through community acceptance. In this country, people very much work on trust, on memory, on history and it takes a long time to build up a relationship with a community.”

IMC’s Country Director in Afghanistan, Giorgio Trombatore, recommends hiring community-based staff with outstanding reputations and avoiding unnecessary branding. “The local community or shura must be involved or consulted at every stage of the humanitarian work being done in the area, bridging the role between NGO/humanitarian organizations and non-state actors to prevent any potential misunderstandings or misbeliefs about what is being done,” he said. “All the amendments or potential changes in the given set programmes must be thoroughly discussed and conveyed within the community.”

The flip side of building strong community relations though is that this may lead humanitarians to work where they have relations rather than where the needs are greatest. It is clear that building community understanding and support takes time.

The European Commission’s aid body ECHO is involved in a number of projects to boost access, something that can be difficult for NGOs to dedicate resources to under normal short-term project funding.

“Access is something that is difficult to measure – not like counting shelters constructed or hygiene kits distributed,” said Danielle Moylan, protection and advocacy manager at the Norwegian Refugee Council (NRC). “It’s an extremely long-term project, but rolling out projects is proof that access works.”

“This year has been one of the worst since the conflict started: It’s definitely not getting better, and that’s obviously a concern” NRC have been working in Kandahar for 18 months – setting up, just as many agencies were leaving. This week they start a new push to work on rural projects in Faryab Province.

“Recruiting people from villages in Faryab where we want to work, is a big element of gaining acceptance. We also empower all our 500-plus national staff so everyone knows what we stand for. That has an incredible benefit for community liaison,” said Moylan.

Some groups, like the International Committee of the Red Cross, have long worked with armed groups and also wider community leaders to spread the word about international humanitarian law and protection issues. These are long-term efforts, which, when successful, build acceptance of aid work.

Technological developments do potentially open up some new avenues for aid workers to manage a lack of aid access.

As US troops pull-out, the US Agency for International Development (USAID) is reportedly looking for bids on a five-year monitoring contract, potentially worth up to $170 million, to keep an eye on aid projects after the drawdown using a range of tools including smartphones and GPS technology.

Mobile phones are increasingly widespread in Afghanistan, with network coverage increasing as well. In 2010 USAID estimated 61 percent of the population had access to a mobile phone. Communication, photographs and even GPS are all possible on relatively cheap devices.

The World Food Programme’s Beneficiary Feedback Desk, allows beneficiaries to call into a hotline to report issues with aid delivery.

Nevertheless aid workers or their partners could also face the risk of appearing to be spies as they carry out their monitoring work. And technology rarely provides a complete solution. Network coverage is still patchy, and mobile phones are largely in the hands of men, and also under shifting ownership.

“You need to have a combination of solutions – mobile phones won’t solve everything but it can provide a record,” Strand told IRIN. “It’s a kind of add-on to the documentation, and also a way to set-up complaint mechanisms. But you still need physical visits. You need to sit and drink tea.”

The idea of remote management of projects is seen negatively by many in the humanitarian community. According to a January 2014 report by the Afghanistan Public Policy Research Organisation (APPRO), “most [international NGOs] recognize that remote management cannot be a permanent substitute for ongoing onsite management because the quality of the work would very likely suffer.” Corruption is seen as a significant risk when working without an on-the-ground presence.

An older technology, radio, is seen by many as the most useful channel for communication with communities, and NRC have a long-running project supporting a popular radio drama that explains humanitarian work.

This is something underlined by the head of OCHA in Afghanistan, Aidan O’Leary, who writes that “Humanitarian agencies need to build a culture of ‘how to stay’ as opposed to ‘when to leave’, allowing actors to take acceptable risks when these are warranted and using creative approaches to reduce risk.”

The setting up of the Common Humanitarian Fund this year has helped encourage humanitarian actors to move into key areas where access can be difficult – funding frontline healthcare, evacuating civilians, and providing basic health and nutrition services in contested areas. A humanitarian risk management unit was also established this year to better identify risks and put in place mitigating measures.

The humanitarian coordinator for Afghanistan, Mark Bowden, says he believes progress is being made on access, pointing to the absence of attacks on health centres during the presidential election, despite the controversial use of several as voting centres.

“It’s a tangible aspect of what I think is better recognition. We still don’t have anything like free and open access from either side. But there’s a feeling that we’re moving forward on this issue, and that legitimate humanitarian actors are being recognised,” he said.

For long-term actors in Afghanistan, the concern is that the easiest response to access problems will be to abandon difficult zones for the relative safety of urban programming and informal slums.

There is no magic bullet that fits all agencies. Instead, humanitarian actors need to each develop their own access strategies in line with their operations and dynamics, says ECHO’s Luc Verna. Support from NRC helps actors to share strategies and learn from others.

Original article can be read at: IRIN

Vice President Harris and Dr. Biden: Your Silence on Afghan Women Is Deafening

What we should be shocked about is the near-silence here in the United States from Vice President Kamala Harris and First Lady Jill Biden — arguably America’s most powerful women — I ask the former prosecutor Ms. Harris and the current professor Dr. Biden: Where are your outspoken voices on justice and education for the women and girls of Afghanistan?