Afghanistan: How to Oversee Aid in Uncertain Times

From the U.S. Institute of Peace blog The Olive Branch. You can view this post on the USIP web site here. June 23, 2014

Last weekend, as many as 7 million Afghan voters are reported to have defied skeptics and cast their ballots for a second time this year in a runoff election to choose a president. Although the U.S. and other international partners are moving to reduce their military presence in the country, the next Afghan administration will still need significant military and non-military assistance. A report by USIP and the Special Inspector General for Afghan Reconstruction (SIGAR) lays out the discussion of a joint symposium that explored how aid could be prioritized, designed, managed and monitored.

Although the Afghan government has taken steps to improve its ability to generate revenue from customs and taxation, the country remains highly dependent on donor funds for many key functions, and in recent years, revenues have stagnated. The United States will need to think carefully about how to structure its assistance to the next Afghan government.

Although the United States and its partners have made considerable progress in supporting the development of an Afghan government capable of securing its own territory against militant and transnational terrorist groups, “the task is not over, and will require long-term international support — albeit at more sustainable levels than those of the past decade,” Andrew Wilder, vice president for USIP’s Center for South and Central Asia, wrote in the report. 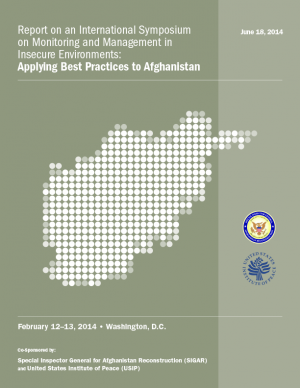 USIP and SIGAR organized the symposium to gather experts and practitioners from across and outside the U.S. government earlier this spring to assess the lessons and challenges for overseeing aid distributed in active conflict areas such as Afghanistan. The highlights of those discussions are now available in a conference report released today by the two organizations.

The U.S. and other donors have committed to financing the Afghan army and police through the next decade, and the administration’s 2015 fiscal year budget request includes $1.2 billion in non-security assistance for Afghanistan. While this represents a major decline from peak appropriations in 2010, Afghanistan remains one of the largest U.S. aid programs globally. Yet movement outside of guarded compounds is being increasingly restricted as the military coalition that helps provide security draws down.

Managing that aid effectively will prove a significant challenge, cautioned John Sopko, the Special Inspector General for Afghan Reconstruction, in the report. He noted that “significant portions of Afghanistan are already inaccessible to SIGAR and other U.S. civilians,” and ” ‘oversight bubbles’ are getting smaller as U.S. military units are withdrawn and coalition bases are closed.”

Conference participants expressed concern about the Afghan government’s substantial needs and about the risks facing aid implementers in the country’s uncertain security environment. They also underlined the need to be realistic about what development assistance can accomplish and the importance of effectively managing the continuing partnership with Afghanistan.

If international donors and Afghan recipients both work to meet previous commitments to enact reforms on each side, reduced but sustained aid might help consolidate and strengthen Afghan institutions and political processes. Those ultimately will determine the government’s ability to support itself over the long term.

Some participants argued that reduced U.S. assistance, managed carefully, could even spur more strategic thinking about how to best prioritize aid and how to ensure that aid does not fall prey to waste, fraud or mismanagement.

“With external resources for Afghanistan shrinking during the coming years, there will be a need to prioritize spending — rather than spending money because it is there to spend –which in itself should improve the quality of projects being implemented,” USIP’s Wilder wrote in the report. That would require building monitoring and evaluation into project design from the beginning, and working to clearly link those project assessments to broader stabilization strategies at the macro level.

Improvements also depend on better coordination and information-sharing among and within donor organizations to ensure that the declining, but still substantial, assistance is not wasted due to duplicate efforts or a lack of institutional memory about what sorts of programs have seen successes and which have not worked in the past.

New technologies can potentially help extend oversight on some indicators in remote or otherwise inaccessible areas, where civilian aid officials may no longer have international security force protection. But these tools face clear limits for what they can reveal, particularly in gauging qualitative impact.

Engaging closely with local Afghan partners, communities and the Afghan government on project design, implementation and evaluation, and working to build local capacity to assess the effectiveness of aid, can potentially help offset a declining international presence. But this carries its own set of risks. It may be difficult to confirm the reporting of local partners or to manage security threats against Afghans who cooperate with the international community and with their own government.

Leaders at USIP and SIGAR have said they plan to continue the discussion going forward, in order to share lessons between aid managers, implementers and overseers on how to best remain engaged with Afghanistan while also mitigating risks to the overall objective of stabilizing and securing the country.

Colin Cookman is a senior program specialist in USIP’s Center for South and Central Asia. 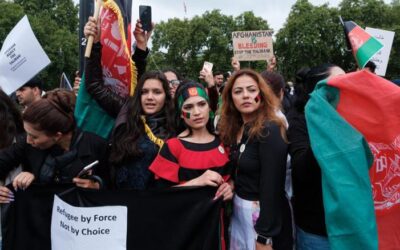