Does press freedom promote democracy or the other way round? Martin Scott considers the influence of the media 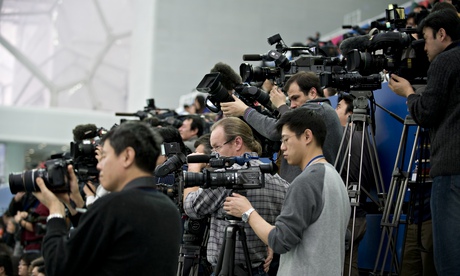 Is journalism really an effective ‘searchlight on corruption?’ Photograph: Dan Chung for the Guardian

One of the aims of World Press Freedom day in May was to encourage us to reflect on the value of an independent media. This is something I’ve been thinking about a lot recently while writing a new book on media and development and co-producing the video below. How exactly does good journalism promote transparency and accountability? What role can technology play in enabling ordinary citizens to promote good governance?

One of the most famous answers to such questions comes from former World Bank president, James Wolfensohn, who said: “A free press is not a luxury. A free press is at the absolute core of equitable development, because if you cannot enfranchise poor people, if they do not have a right to expression, if there is no searchlight on corruption and inequitable practices, you cannot build the public consensus needed to bring about change.”

These are fine words. But what do they actually mean? It’s not clear to me how a “searchlight on corruption” leads to the building of consensus, for example, or whether consensus is always the result of “enfranchising poor people”. We might also wonder whether public consensus is an effective mechanism for change in any context other than a fully functioning democracy. Indeed, does press freedom promote democracy or does democracy promote press freedom?

Unfortunately, such grand and over-simplified claims about the role of press freedom in development are common in public discourse. Whether in stories about mobile phones and good governance or internet access and economic growth, it’s much easier to persuade people of the importance of press freedom if you pretend that the links to development are direct and clear-cut.

The trouble is, they are not. The media have multiple, overlapping roles which are fundamentally shaped by local contexts. Pretending that they don’t leads to bad project design and policy making. It also fuels the mistaken belief that access to technology alone is enough to solve problems.

Such misleading stories about the inevitably positive role of technology are not limited to the subject of press freedom. Those concerned with behaviour change communication also tell exciting tales about the benefits of mobile phones, for example, in promoting flood safety oreducating young mothers. Yet disseminating information through the media will only change behaviours in very specific circumstances – when the right people, can access the right information, at the right time, understand it, trust it and be able to act upon it. It’s no use telling people to boil their drinking water, for example, if they don’t have the means to boil it.

The point here is not that the media doesn’t matter for development. It does. Increasingly. The point is that efforts to highlight the importance of the media should exist alongside, rather than seek to obscure, recognition of the complexities of the media’s role. Ultimately, it’s not helpful to pretend that the media always have a direct and positive influence on development.

Martin Scott is a lecturer in media and international development at theUniversity of East Anglia. Follow @martinscott2010 on Twitter.