CSFilm’s project in Haiti is well underway. We are currently talking with several potential collaborators in the U.S and in Haiti, and we are planning a trip to Haiti for this month. Here’s a quick introduction to our plans for the project in Haiti:

This year Community Supported Film will train Haitian storytellers to make documentary films about the causes of and solutions to the economic and social development challenges their communities have faced since the 2010 earthquake. Their short films will be released in advance of the 5th anniversary of the earthquake in January 2015.

This project will be a partnership between Haitian community media and development organizations, Community Supported Film and international NGOs.  The intimate lived-reality stories produced by the Haitian storytellers will counter the mainstream media’s focus on disasters, conflicts and crises which leave core-causes and long-term development issues unaddressed or misunderstood. 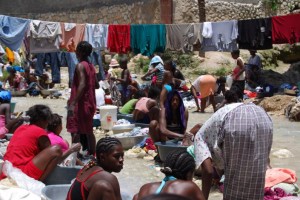 While Michael is in Haiti he will meet with Haitian community media groups and local and international development organizations.  The community media groups will help us define the project so that it contributes to their needs and plans.   The development organizations will identify the specific issues in Haiti that the films could most effectively focus on.  In more recent talks with the American Jewish World Service (AJWS) and Action Aid, we have learned a lot about their work around land grabs in Haiti, and the importance of helping Haitians protect their natural resource and land rights, especially for women and in areas where mining and tourism are being developed. Check out AJWS’s special report on Human Rights in Haiti. 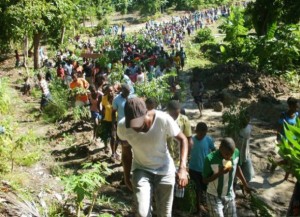 Land grabbing is currently a vital issue in Haiti. This article discusses the issue of land grabs on the island of Ile a Vache in Haiti, and how peasants are fighting back against the construction of an international airport being built to promote tourism. Read more about it here.

This spring is an exciting time for CSFilm with our Haiti project underway! Remember to check our Facebook and Twitter pages for news and updates!