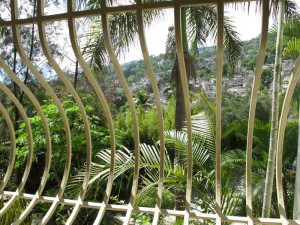 Spring is eternal in Haiti, where I’ve been for the last week. Often quite hot and humid, there is a cool breeze right now as the rain clouds come down over the hills surrounding Port-au-Prince. Steep hills covered in shacks of mostly cement clinging to every nook and cranny. As usual in a country as poor as Haiti, the poorest are pushed into the most inhospitable locations to try and scratch out a living space.

Too often I am surprised at how easily I could get confused and think I am in Afghanistan. With roads and homes in disrepair the look of rebuilding Kabul after 30 years of war does not feel that different than the rebuilding of Port-au-Prince after the earthquake of 2010. 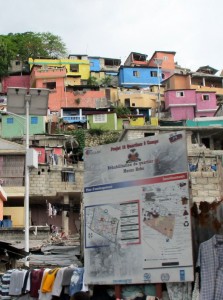 But of course the cultural differences are dramatic, for one the call to prayer and sermons of the Muslim tradition have been replaced by the sounds I hear now, coming from a tin roofed building across the street – the music and orations of a Christian service.

I came 8 days ago with the usual mixture of anticipation and anxiety about the development of our new program in Haiti. After months of research, spreadsheets full of contacts and a new assistant meeting me at the airport, we began the adventure of knocking on doors at Haitian community media groups and development organizations, international aid groups, local and international journalists and filmmakers and embassies and funding agencies. It has been a whirlwind tour up and down the steep, steep streets of Port-au-Prince, hunting for addresses defined by the color of their door, a number of speed bumps from a corner or the shop nearby. 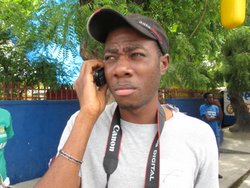 Ralph Thomassaint Joseph has been my guide and partner and how lucky I am to have him. CSFilm posted a job description for a Haitian program assistant to help with translation and logistics as we initially developed the project in the US. Ralph, living in Port-au-Prince, heard about it and applied. As he said to me, “I hesitated, I know it was a bit crazy, you in Boston and me here, and my English is completely self-taught and not very good, but then I decided, why not.” Why not indeed. Ralph’s English is very good and he is a very sharp, sensitive, committed young Haitian. I’d say young Haitian journalist, but as Ralph would tell you, he’s studying law because it is nearly impossible for a journalist to make a living in Haiti – the quality and demand has to be increased. None-the-less he has done years of remarkable reporting – a lot of it without pay – from the camp that has housed 1.5 million people since the earthquake.

There are still over 140,000 in makeshift camps. While in the western media, if we hear anything about Haiti, we often hear about the 7-8,000 houses the international aid effort has built in Port-au-Prince, the figure that we don’t typically hear is that some 80,000 homes have been rebuilt by Haitians themselves without any aid. But, I was introducing Ralph… Take a look at the multi-media piece about the camps that just won Ralph the Maison de la Radio in Paris, the Prix Chaffanjon. 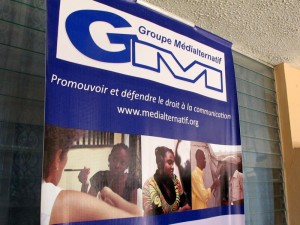 Putting together my research and outreach with Ralph’s local knowledge about the media and development world, we have organized some 30 meetings. Check out the work of some of the journalism and media making groups that are among some of our potential training and distribution partners: Groupe Medialternatif, Cine Institute and SAKS. Our objective with this trip is to learn what is already happening and needed in the documentary media making and journalism sectors and how CSFilm’s program can contribute constructively.

Night has fallen and the thunder has started and soon I expect there will be the uproarious sound of heavy rain pounding on the tin roofs around. I look forward to sending further updates in the near future. Check out the first photos from this trip in the gallery.