We did it, and now… Haitians, Afghans, New Immigrants and Refugees

I hope your year is off to a good start and you are not badly affected by the season’s challenging weather. 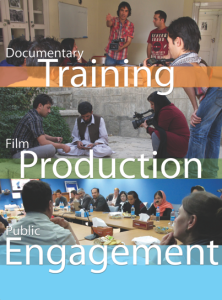 I wanted to give you a quick update on our activities since December. First of all, our 2013 year-end fundraiser was a great success, raising $26,561, surpassing our $20,000 goal!

This good news is allowing us to:

1. Move forward with our plans to train new immigrants and refugees in documentary filmmaking. At meetings over the last few weeks with local immigrant and refugee organizations, we have heard that immigration reform, while stalled, will likely move forward after the November mid-term elections but probably not until the 2015 congressional session. In any case, community activists are suggesting that our joint storytelling and public engagement work will be most effective if it calls attention to issues that new immigrants and refugees will face after reform is passed.

What no one is talking about is that immigration reform is just the beginning of the process of fully integrating our new immigrants and refugees. With this in mind, we are organizing a local summit meeting, to finalize story focus, engagement strategies, and timing.

2. Train Haitians to tell their stories about effective and ineffective aid after the earthquake in 2010. This initiative is gaining traction with Haitians and organizations concerned with disaster management and sustainable economic development. All agree that the films will have most impact if released in advance of the fifth anniversary of the earthquake in January 2015.

We are very motivated by the potential impact of this project, but know that it is a huge undertaking for the coming year. To fully fund it, we plan to launch a Kickstarter campaign in May, in addition to seeking ongoing foundation support.

3. Continue our work with volunteers from Harvard Business School’s Social Enterprise Consulting Program. Since last fall, these volunteers have generously offered their time and expertise to develop CSFilm’s strategic plan. This has been enormously helpful as we solidify the vision and mission of our young but determined organization.

4. In Afghanistan the only certainty is uncertainty. In light of this we have decided to wait until after the elections, which will likely not end until mid-year, and the summer “fighting season,” to access how we can most effectively continue our work.

As you can see we have big plans to expand and deepen our mission. We hope to earn your continued intellectual and moral support as we forge ahead.

Many thanks and best wishes,

P.S. Please help us spread the word about the work of Community Supported Film by letting us know if there is an individual, organization or foundation you could introduce us to.