This winter Michael Sheridan, director of Community Supported Film was contacted by high school student Nick Degug to answer some questions about Afghanistan. Below is a sample of the interview and a photograph of Nick’s final presentation. 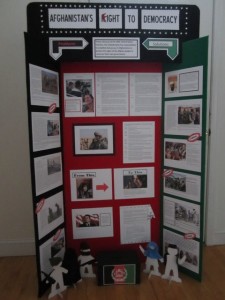 One of the toughest things about doing this project is that there is a lot of information available but the more I read about Afghanistan, the more I question what to believe and what is erroneous.
…

ND:What time frame were you in Afghanistan?

MS: I began research for my work in Afghanistan in 2008.  In 2009 I went on my first production trip during which I produced the trailer for a film in development-Brewing Tea in a Kettle of War. During this trip I decided to concentrate on training Afghans in documentary filmmaking.  In 2010 I returned in June for fundraising, partnership development and pre-training work.  October through December 2010 the training, production and screenings of The Fruit of Our Labor occurred.  In 2011 and 2012 I made multiple trips to mentor trainees through commissioned projects and to develop a sustainable program in Afghanistan.   The work continues.

ND: How does the violence in Afghanistan today compare to that of 2001?

MS: I did not experience Afghanistan in 2001, but generally speaking after the NATO invasion in 2002, during which there were substantial civilian casualties, the violence rose from 2002 to 2011 and has since leveled off to 2009 levels.  There was little battle front war activity during the Taliban regime 1996-2001 – although it was a brutal regime in terms of its implementation of Sharia Law and a harsh justice system.

ND:How have Afghans’ lives improved since you have been there and provided this opportunity to express themselves?

MS: For the long view, most Afghans were either survivors of the long civil war, the Taliban, or refugees before 2001.  Afghanistan has seen the largest repatriation of refugees of any country in the world.  These people are settling back into a country that has not had a stable government, except for the Taliban, since the late 1970s.  Afghans for the most part do not refer to their country being at war since 2002.  When they talk about the war they are typically referring to the very violent, bloody and country-wide civil war from the 80s through the 90s.  The American ‘war’ of the last decade is an insurgency.  Most of the country does not experience war, but is at risk of intermittent insurgent or NATO/Afghan National Army attacks and skirmishes.

For Afghans the last 10 years has been primarily about recovering from the civil war and Taliban extreemism.  This is most important in terms of clearing landmines from agricultural lands, rebuilding basic infrastructure, electricity, water systems, sanitation and roads.  Slowly, produce and products are coming back on line and people are starting to be able to buy staples produced in Afghanistan.  Until recently most everything consumed in Afghanistan was being imported – primarily from Pakistan.

From the perspective of the media and journalism sectors, there were no media outlets/TV stations allowed during the Taliban – for cultural and political reasons. Now the country has hundreds of radio stations – mostly province based – through which most Afghans get their news and information (the country has ~80% illiteracy).  TV stations in Kabul alone now number in the 40-50 range.  The lack of electricity in most of the country prohibits rural penetration of TV. Journalism is getting back on its feet but there is a lot of work to be done to strengthen this important sector and thereby the democratic, social and economic development of Afghanistan.

ND: Will the Afghans be able to sustain or even expand the skills we taught them if NATO leaves?

MS: If you are referring to military skills, then yes, this is the most important and primary area of skill that NATO could and should have concentrated on providing since 2002.  Unfortunately, training of the Afghan National Army and Police did not get real attention by NATO until 2010.  The defense and policing capacity of the Afghan government still has many years of training and provisioning required.   There is effectively no Afghan air force which is essential – particularly in such a rugged mountainous terrain.

ND: In my research, it seems that the majority of improvements have been in women’s rights.  What else has improved since America began assisting the people of Afghanistan?

MS: The international community has supported Afghan social and economic development extensively since 2002.  Japan and India are among the largest donors.  India has provided Afghanistan with its main highway, the capital city with electricity and is now building the parliament – among many other initiatives.  The Japanese and many other northern European countries have supported infrastructure, education and rural development.  Rural development is the most important in Afghanistan since it is still primarily a society dependent on subsistence agriculture.  The most important and successful development work has been conducted by the Afghan government’s National Solidarity Program (NSP) – a nationwide, grassroots, community and economic development program.  Since 2001 the US government has increased the amount of foreign aid controlled and implemented by the US military from 3% to 28%.  This has led to an ineffective program that implements the majority of our aid work through military units called Provincial Reconstruction Teams (PRTs)  (You can see a brief introductory film that I made comparing the PRTs and NSP on the CSFilm website).

ND: Do you think it is necessary to continue our efforts in Afghanistan?

MS: I was against a military approach to helping Afghanistan in 2001 and subsequently to our dominantly militarized approach over the last decade.  But now that the international community has taken a leading military role in the stabilization/destabilization of the country over the last 10 years, it has a moral obligation not to abandon the country.  In 2002 the UN had a peace and economic stabilization plan ready to implement but the US said it was going to stay and do the job.  What Afghans need is not a 5 or 10 year plan, dominated by a few self-interested powers, but an international plan that will commit to regional and national stabilization for decades to come.  As in Central Africa and other regions destabilized by hundreds of years of colonialism, Central Asia, with Afghanistan lost in the middle, needs long term stabilization and development assistance.

ND: In your opinion, what is the majority of the Afghans’ feelings about U.S. involvement/assistance in Afghanistan?

MS: Most Afghans are very thankful for the international community’s assistance.  Their biggest concern is whether they will be abandoned by the international community as they were in the 80s – which lead to the devastating civil war.   Most Afghans appreciate NATO’s military role in Afghanistan – primarily eager to see Pakistan’s role diminished and the insurgent extremists such as the Taliban weakened.  They are dismayed however by how much money NATO has spent and how strong the insurgents still are.  Afghans are easily swayed by conspiracy theories and many believe that the Americans are too strong to have not easily defeated the insurgents and therefore must secretly be supporting them and the Pakistanis.

ND: Similarly, do you believe the majority of the Afghan citizens favor a democratic government?

MS: Yes, most Afghans support notions of democracy and are eager for transparency and equitable justice – but democracy is defined differently by all people.  For the majority of Afghans, Islam is dominant in their lives, and they cannot conceive of anything, including democracy, playing a more determinant role than God and Islam.  Therefore, many Afghans do not look to a western concept of secular democratic government as being appropriate for their social, judicial or economic well-being.