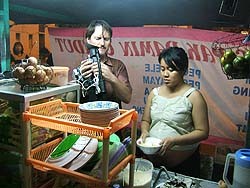 Last year, Eka Budianta and Ben J. Otto wrote a piece about Michael Sheridan’s Fulbright experience in Indonesia for a book honoring the 60/20 anniversary of the Fulbright Program in Indonesia and the American-Indonesian Exchange Foundation (AMINEF). Since the start of Fulbright Indonesia in 1952, over 2,200 Indonesians have been sent to the U.S. and over 800 Americans have been brought to Indonesia as part of a rich educational exchange program. Over the years, Fulbright alumni have embodied the Fulbright mission of “leadership, developing mutual understanding, personal development, and giving back to one’s community.”

In 2007, Michael received a Fulbright scholarship to teach documentary film production at two art and technology institutes in Indonesia. He was also involved in the production of a videosonic film called Instant Noodles, which centered on the issue of global warming. Through these experiences, as well as a surprisingly inspirational bout of dengue fever, Michael became interested in the power of participatory filmmaking and subsequently  developed the model for community-supported film.

Read the piece on Michael from “Across the Archipelago, from Sea to Shining Sea: Commemorating the 60/20 Anniversary of Fulbright and AMINEF” below:

Their Own Voices / Eka Budianta and Ben J. Otto

One thing that Indonesia and the Fulbright Program gave me was the space and time to really think through and expand what I wanted to do in film, how I wanted to produce films, and examine what the role of film was in social change. It was when I was teaching at the Bandung Institute of Technology (ITB) that I really started to pull together ideas about integrating my teaching and filmmaking practice, ideas that I’d been formulating throughout my 20 years of filmmaking and teaching. I wanted to train Indonesians in filmmaking so that their own voices would get heard and influence global opinion and action, particularly around issues of social and economic development.

Actually, dengue fever played a role in this. I came down with dengue in Bandung, and it was the first time in many years that I was forced to rest. The illness required that I stay in bed and not move for a week. I was sicker than I’d ever been. But it gave me a lot of time to think about things, and by the end of it, all these things really solidified in my head and I thought: this is very, very healthy. It was a very useful illness. I ended up writing a treatise about the elements of participatory film, the elements of training, and the elements of public engagement through film that needed to come together into one project, and I began to develop a new model of community-supported filmmaking. Inspired by the model of community-supported agriculture, community-supported film would apply the principle of investing directly in people on the ground to support the production of high-quality films from a local perspective. 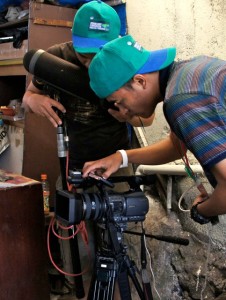 Prior to that I taught for a semester at the Jakarta Arts Institute (IKJ). One of the best things to come out of my time there was a videosonic film called “Instant Noodles” in partnership with Pak Sardono Kusomo, the institute’s dean, and Yola Yulfianti, a choreographer and dancer in her own right who was a member of Sardono’s dance troupe. The film juxtaposed consumption and environmental destruction. It was exhibited in the United States, around the same time as the Bali conference on global warming, as part of an exhibition called “Greed, Guilt and Grappling; Six Artists Respond to Climate Change.” Sardono has been working with the forest people for many years. It was very inspiring to see how he was engaging people in the art-making process and then creating performance work around forest issues.

Out of these experiences developed what has become my life’s work, the newly formed nonprofit organization called Community Supported Film (CSFilm). It’s based on the idea that local perspectives are essential, if we are to make the right decision about how to help others in their process of socioeconomic development. This has led to what I’m now doing in Afghanistan, working with people there and training them in documentary filmmaking and video journalism. The films they produced are being used in dozens of screenings and presentations from U.S. Congressional briefings to international film festivals. We have plans to train local people in filmmaking in Haiti, too. I’d love to return to Indonesia one day and develop CSFilm’s program there as well.

My Fulbright grant in Indonesia provided a solid experience and passion for filmmaking and teaching. The context and time provided by this opportunity expanded my perspectives and created the pathway for the full development of CSFilm and its critical work to use media as a tool to help building a more peaceful and equitable world.