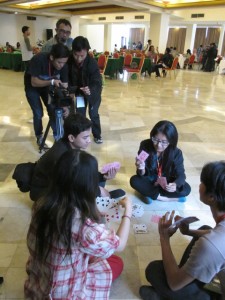 This November CSFilm director Michael Sheridan was interviewed by the Jakarta Post about his intensive training sessions in Indonesia.

As a documentary filmmaker, Michael Sheridan believes in the power of film to change the world and make it a better place for all.

In 2009, he went to Afghanistan to make a documentary film that aimed to present an intimate look at the daily lives of local Afghan villagers from their own, often-unheard perspectives, several years after the US-led invasion of the war-torn country.

Through the planned film, titled Brewing Tea in a Kettle of War, Sheridan hoped to capture the successes and the challenges facing Afghans in rebuilding their villages and developing their communities.

Naturally, Sheridan would need to get total and personal access to Afghan villagers — the families, the women, all the activities of daily life — to be able to grasp their real day-to-day experiences, and that was where he encountered his first major roadblock.

The filmmaker had been able to negotiate that kind of access in other conservative countries, including Pakistan and Bangladesh, but Afghanistan proved to be a far greater challenge.

So, he opted for another route. He decided to create a program to train local Afghan storytellers in documentary filmmaking and let them shoot their own documentaries based on the socioeconomic issues they wanted to pursue.

In the process of developing the project, Sheridan established Community Supported (CS) Film, which has since maintained a continuous partnership with local Afghan storytellers and filmmakers who are able to share their stories through films with others around the world.

In the fall of 2010, CS Film conducted an intensive five-week training of 10 Afghans — four women and six men from three different ethnic groups — in documentary production. The resulting short documentaries were then gathered together in the omnibus The Fruit of Our Labor: Afghan Perspectives in Films.

The 10 films have been screened at more than 50 venues around the world, including the US Institute of Peace in Washington, DC, the Asia Society in New York and the World Bank in Kabul.

The Fruit of Our Labor recently became the centerpiece of a congressional briefing at the US Congress that included the live participation of the Afghan trainees via the web.

One of the short documentaries, Death to the Camera, won the Best Documentary award at the Autumn Human Rights Film Festival in Kabul and was an official selection for the 2012 Hot Docs International Documentary Festival in Toronto.

Two years later, Sheridan can still recall the training days in Afghanistan as if they were yesterday. “It was fascinating that one of the most dominant issues that the trainees talked about was what an incredibly multicultural experience it was for them, to be in that room, working in groups with women and people from other ethnic groups.

“The act [of training] itself was so transformational for them because they don’t normally have opportunities to actually mix with each other, communicate, and just sit around and eat together.”

The experience ultimately reaffirmed Sheridan’s belief that films and filmmaking can act as a peaceful medium to resolve conflict and defuse tension between ethnic groups in conflict areas.

“It is really essential that we use the media to allow people to see what they usually don’t get to see in the different ethnic groups and to allow people to break open and break into each other’s world that normally can get so isolated and so divided,” he said.

However, it is rather unusual for a person with such a strong belief in the power of film to have grown up with the exact opposite opinion. “In a funny way, in a kind of an ironic twist, I grew up very anti-film,”
Sheridan said, laughing heartily.

Born on May 19, 1962, Sheridan spent his childhood in Boston, Massachusetts. His first break in the world of creative arts was in the theater. He started as a child actor before climbing his way through the ranks in stage design and stage construction.

“During my high school and college years I was thinking, ‘You have to go to theaters and live the stories’, while believing that fiction films are cheap and easy. It was biased, for sure, and ridiculously extreme,” he said, smiling.

Sheridan spent his early 20s in Europe, where he got involved in campaigns related to human rights and poverty and volunteered at organizations like Oxfam. After seven years he decided to return to the US to follow his childhood passion.

He said, “I was about to leave Oxfam and work with a friend’s theater company when another friend talked me into working with her in a documentary that she was doing about the indigenous community in Guatemala.

“So I started working with her as an editor, learning how to edit her film. It was from that process that I got into documentary filmmaking.”

The rest, as they say, is history.

Sheridan traveled through Indonesia in October and November of this year to conduct trainings similar to the Afghan ones in three cities: Jakarta, Bandung and Denpasar.

In each of the cities, he met with 50 trainees from various backgrounds in a series of sessions spread over four days. “Frankly, it’s an extremely stressed and limited opportunity to only have four days to work with 50 people with limited equipment on these trainings. But, in any case, surprisingly, in just four days we got a lot done,” he said.

During these classes, the trainees were introduced to various cooperatives, economic activities or individuals just starting out with their own businesses. Sheridan then asked the trainees to tell character-driven and situation-based stories in just one to three minutes.

The trick, according to Sheridan, is to really focus the storytelling on the visuals instead of the talk.

The result of the trainings were 12 “pretty decent” short stories about themes ranging from the challenges with traditional transportation in the modern world to the challenges of local gay, lesbian and transsexual communities in their daily lives.

So, after Afghanistan and Indonesia, where is Sheridan planning to bring his Community Supported Film to next?

Surprisingly, the answer is back home in Boston.

He said he planned to conduct trainings like the ones in Afghanistan and Indonesia in Boston’s Chelsea neighborhood, which has numerous communities of immigrants and refugees from regions like Central and Latin America, as well as
Somalia and Iraq.

“You can imagine the tension set up between, for example, the Latino culture and very conservative Iraqis or between Somalis and Iraqis over religious issues. Even the Iraqis almost have no interaction with each other because of the fears between different ethnic groups in Iraq, which they bring to Chelsea,” he said.

Here, filmmaking can play a fantastic role by allowing these communities to tell their own stories and to constantly start opening up conversations.

The most important thing, though, is to invite the right people to watch the films so that real change can occur.

“I believe there are many amazing people doing interesting things in every neighborhood. We just have to get out there, find those stories, share them and show what is being done that works,” Sheridan said.

“The next step is to force people at political levels to look at those stories by utilizing public engagement and screening events so that the right people are seeing the right stories and the right changes happen.”