Follow along with Michael Sheridan’s second journal entry from the radio documentary training in Kabul, Afghanistan for the Afghan staff of America Abroad Media (AAM).  (The first journal entry can be read here.)

Saturday’s training reviewed principles of storytelling and structure, treatments and interest statements. Three teams of two went off to research stories they could turn into character driven, lived-reality radio pieces. Each team is to produce a narrative description of the story to be produced. 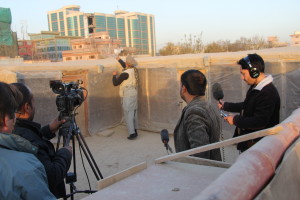 Sunday the teams pitched their stories to each other, followed by a peer-review based on the interest statements and story structure potential. Two of the three were determined very good and one was determined to be an issue without a story vehicle. The team agreed to find a new story or a way to address the issue they were raising through a viable character and series of scenes.
On Monday, the three teams of two started production. One story is about a litigator at the attorney general’s who makes 80% of his income from raising pigeons on his roof.  The second centers on a car mechanic who is designing and building an original model of luxury car from spare parts and ingenuity. Finally, the third story is about a butcher who is raising rams for fighting even though it is prohibited by Islam and his Mullah.  Interestingly enough, his Mosque looks out on the area used for the competitions.

With production now complete, the teams spent a sleepless night, transcribing and logging their material. This morning we reviewed their material and worked together on a draft story structure – of scenes and interview material – for them to construct into a paper edit. Time is very tight but if we burn some more midnight oil we hope to have the edits finished by tomorrow (Nov. 22) evening. 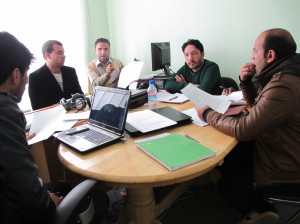 On a more practical note, this past Monday I woke up to no water in the guesthouse and electricity was not on at the AAM offices, which meant we were cold as well as powerless. No one was sure whether there was a problem because of the near-by construction or because of the rolling blackouts announced by the Central Power Authority, deemed necessary to control overloads as winter approaches. Despite the lack of power and the daunting threat of cold, some new and exciting developments might lead to an extended stay here in Afghanistan. Updates to follow or, I’ll continue with my plan to spend two more weeks here on CSFilm production work, followed by a visit to family in India before returning to the States on Dec. 15th.

In addition to working on the training program this last week, I made some time to see Carol Dysinger’s Camp Victory, Afghanistan. The film follows, over three years, NATO’s efforts to train Afghan soldiers and to help build a viable Afghan military. The film was shown at The Venue – an artsy, restaurant café with what is I believe, but don’t quote me, Kabul’s only recording studio. A young American woman – a former New England Conservatory cello student – opened it with her Afghan partner after coming to Afghanistan to teach at the music school. The Venue allows the couple to do something more than host Afghan musicians in their living room! 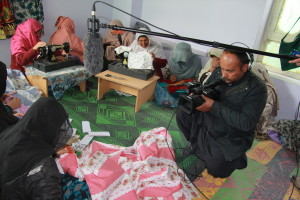 The Venue puts on concerts, events and screenings and stands out as an expat hangout that is also open to Afghans – giving local bands the unusual opportunity to play for Afghans (follow The Venue on Facebook and/or Twitter).