US Military Pulls Out Development Teams; See our short film

To learn more about these troubled “Development” teams, see our short: https://csfilm.org/films/brewing-tea-in-a-kettle-of-war-film/

JALALABAD, Afghanistan—The U.S. military is ending a massive nation-building experiment in Afghanistan, shutting down teams that have poured hundreds of millions of dollars into roads, schools and administrative buildings in the country’s hinterlands.

The shutdown, part of the withdrawal of U.S. and coalition forces over the next year, will mark the end of a hearts-and-minds campaign that has been central to the military’s strategy.

As part of an effort to improve the reach and reputation of Afghanistan’s central government, the U.S. and its allies set up over two dozen Provincial Reconstruction Teams around the country to dispense development aid and advise local officials. At least five of these have closed in recent months, and most of the remainder will shut down over the next year.

The U.S. agreed to end the program in a partnership agreement reached in May with the Afghan government, which sees the program as undercutting the effectiveness of local institutions.

The shift is effectively turning off the money flow to Afghanistan’s provinces. Many U.S. and Western officials say they are doubtful that provincial administrations are ready to fill in the void. “No one has a clue how much is being spent in province A or B” by provincial governments, said a senior Western official. “It’s a serious national-security threat to the country.”

Each of the reconstruction teams usually includes some 100 troops, is led by a military officer, and draws on civilian aid expertise, often with representatives from the State Department, the U.S. Agency for International Development and the Department of Agriculture.

With most U.S. forces slated to leave in 2014, commanders at the remaining PRTs are preparing the drawdown. “We’re pretty much in the business of finishing these projects,” said Air Force Lt. Col. Grant Hargrove, who commands the PRT overseeing Nangarhar province in eastern Afghanistan. 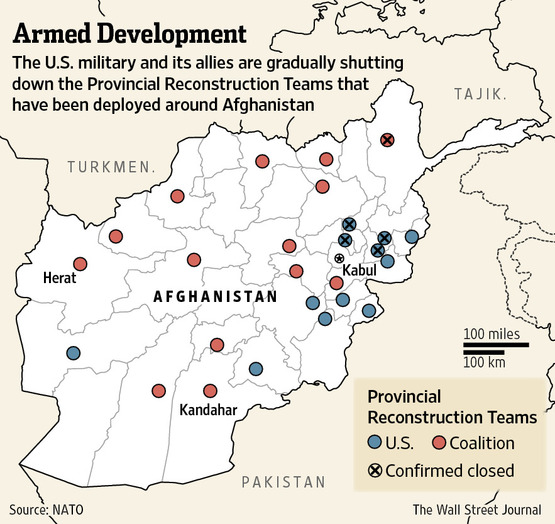 In 2010, at the height of the U.S. troops surge, the Nangarhar PRT spent around $24 million on projects in the province through the Commander’s Emergency Response Program, a fund given to military commanders to invest in reconstruction projects. The work included $5.5 million for street repair in the provincial capital of Jalalabad, $300,000 for the pediatric wing of a hospital and several high schools that cost around $200,000 each. Civilian agencies also channeled money through the PRT.

That CERP money has all but dried up as part of a planned phaseout. The Nangarhar PRT now oversees around half a dozen projects with a total budget of $750,000. Col. Hargrove said the team still has “bulk CERP” available, but the small-scale funds—capped at $5,000 per project—can only pay for a well or a modest irrigation project.

The U.S. has already closed at least four PRTs in eastern Afghanistan, closing teams most recently in Laghman and Kapisa provinces near Kabul. In parallel, the U.S. is winding down the work of smaller district support teams, which provide similar aid to the equivalent of municipal and county governments.

The June closure has “badly affected” the local economy, said Sarhadi Zwak, a spokesman for the governor of Laghman. “There are no more projects,” he said. “When the PRT was here they would implement several projects and create job opportunities for the people.”

The closing of PRTs will put pressure on provincial governments and local offices of central ministries, said Farid Mamundzay, deputy minister for policy at Afghanistan’s Independent Directorate of Local Governance, a central government agency overseeing local administrations. “Whenever I visit the provinces, I hear from provincial governments that when the PRTs leave, they’ll leave behind a big gap,” he said. “We’re working from Kabul to fill this…but it needs to be done quickly.”

The creation of the PRTs, with uniformed troops taking on the work of aid workers, was controversial. n the program’s early years, iInternational aid groups criticized the military for invading their territory.

At a conference in Germany last year, Afghan President Hamid Karzai railed against the PRTs and district teams, calling them “parallel structures” that have “undermined the development of institutions in terms of strength and credibility.”

Afghan negotiators demanded the a clause calling for the shutdown of PRTs in the strategic partnership agreement with the U.S., which was signed in May. The deal opens the door to a long-term U.S. military presence, but with a significantly smaller footprint than the 68,000 currently in the country. Talks on that long-term presence are set to begin in the coming days.

Afghan National Security Adviser Rangin Dadfar Spanta, who was involved in negotiations over the strategic partnership pact, said the exit of the PRTs would have an upside, because citizens would have to turn to the government for services instead of the PRTs, shoring up local administrations’ authority.

As a result, he added, Afghans would “take the government of Afghanistan much more seriously.”

The PRTs served as centers of gravity in the provinces, with the directors of local ministries turning to the military instead of the central government for project funds.

In Nangarhar, monthly meetings at the provincial governor’s office until recently were a forum for the directors to pitch their proposals.

“All these local line ministries used to come to the PRT for everything,” said Army Lt. Col. Lawrence Shea, who works on economic development issues for the team.

After the withdrawal of most U.S. and international troops in 2014, U.S. civilian agencies talk of maintaining a presence in many parts of Afghanistan to continue development work and provide advice and assistance to the provincial government.

U.S. officials describe Nangarhar, on the Highway 7 corridor that is the prime trade conduit between Afghanistan and Pakistan, as a promising location. But security restrictions and attacks on coalition forces have already severely impeded their work.

“If you look at the PRT for that capacity-building, we’re almost like a consulting company,” said Col. Shea. “And to be a consultant, you’ve got to be with your client, and that’s probably one of the more difficult things to do. Some good work’s taking place, but we’ve moved the ball a lot slower.”

—Habib Khan Totakhil and Maria Abi-Habib contributed to this article.

Write to Nathan Hodge at nathan.hodge@wsj.com