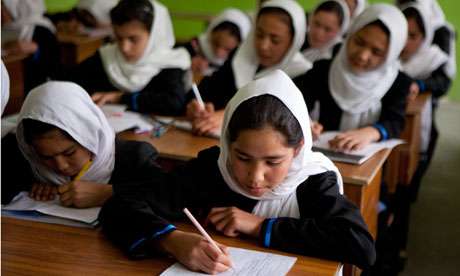 Afghan girls attend a class. A confidential report warned that the British had built some schools in Helmand without considering how they would be maintained. Photograph: Christian Science Monitor/Getty

Schools and health centres built by the British in Afghanistan as part of the military‘s counter-insurgency strategy are being forced to close down because President Karzai’s government cannot afford to pay for them, the Guardian has learned.

Britain has spent hundreds of millions of pounds in the province over the last six years building and restoring services decimated by conflict and the years of Taliban rule.

But the Guardian has been told that a confidential report compiled this year warned that some of the buildings in Helmand were constructed without enough consultation with the Afghan government and without thinking through how they would be maintained.

Senior British officials in Helmand are working with Afghan ministers to identify the schools and clinics that are deemed “critical” and should remain open, while most of the rest could be phased out between now and the end of 2014.

The report made clear the British “had built too much” in the province, and that this was a consequence of the UK military trying to win “hearts and minds” among the populace.

It is not clear how many schools and clinics will be affected, but it is thought dozens are potentially at risk, particularly in more rural areas.

“Of course we built too much,” said one official. “We didn’t think about how the Afghans would pay for it. But it was understandable. Nobody is blaming the military. We wanted to show them what we could do for them, but without regard for sustainability.”

The need to reduce the number of schools and clinics will be a bitter blow to the Afghans who have come to rely on them, and for the British civilians and soldiers who helped to build and restore them.

But though British officials fear the closures will overshadow some of the progress that has been made in Helmand, they also believe it would be better for Afghanistan if the cuts were explained and made sooner rather than later.

The head of the Provincial Reconstruction Team (PRT) in Helmand, Catriona Laing, admitted she is working with the Afghans to identify what should be retained.

The UK is pushing for services in important population centres, such as the capital Lashkar Gah and nearby city of Gereshk, to be kept open.

Those in areas further way from the central Helmand river valley – where security is more precarious – are more vulnerable to closure.

Laing, who is the most senior Nato civilian in the province, told the Guardian: “The key is that we are still here and we can still help the government think through which of those bits of infrastructure are really critical to maintain.

“Helmand is one of the biggest provinces, yet people are still willing to travel to receive better quality services. I think the idea that you need in every district centre, even the really remote ones, a school, a clinic, a justice centre … it’s not all about quantity, it’s much more about quality. My expectation is that there will be some consolidation. That is sensible to do. It will be much more important in some areas to maintain the service than in others.”

Sir Richard Stagg, the UK’s ambassador in Afghanistan, told the Guardian the overbuilding had been caused by a desire to show the Afghans “we were serious” about helping them.

“With the best of intentions, between the period of 2003-2008 we developed a very expansive view of how we could help Afghanistan, and many countries invested a lot in that mission. We focused on the physical and visible rather than the human capital which would manage the country in the longer term.

“The challenge for Afghanistan now is not a lack of roads and school buildings. It is a lack of capacity in its governmental structures in particular to run the country.”

Laing, who has been in post for six months, has ordered a stop to further building projects unless she is convinced there is a proper long-term maintenance budget.

The need for cuts was underlined by the report, which was jointly commissioned by the PRT and the US General, Charles Gurganus, who was head of the military in Regional Command South West.

Written by members of the British government’s Stabilisation Unit, it looked at all the work that had been completed in Helmand and the funds available to the Afghan government as it assumes responsibility under the ‘transition’ programme.

It concluded there is a “mismatch between the value of the assets and the Afghan government’s ability to maintain them”. The report highlighted the scale of development and how some of the projects were not adequately budgeted over the long term.

The British have help to build 270km (168 miles) of new road, and upgraded another 105km; the province now has 55 health centres – twice the number that were open in 2009. Fifteen comprehensive health centres have either been refurbished or rebuilt with money from the PRT. Eighty-six schools have restored and reopened since 2009, bringing the total to 164 across Helmand. Twenty-six new schools have been built.

Though the building programme has transformed services in certain areas, British officials concede the UK tried to do too much, and that it took the counter-insurgency (COIN) doctrine further than was intended.

Under COIN, the watchwords for winning the trust of the population are “shape, hold, clear, and build”.

“We probably put too much emphasis on the build,” said one official. “We should have involved the Afghans more than we did.”

General Adrian Bradshaw, the most senior British officer in Afghanistan, defended the building programme. “It is pretty difficult to do counter insurgency without getting involved in nation-building. Because the one complements the other and we have to have a comprehensive approach.

“COIN campaigns are not won by military means alone. They involve economic, political and development activities that complement the military activity. It is entirely correct that we should have been involved in those things in addressing the insurgency. But I think it is very important to remain focused on the reason why we came here – to prevent Afghanistan ever becoming again a haven for al-Qaida international terrorists. That is the effect we have to deliver in the end, not the total defeat of the insurgency.”

The priority for the PRT, which is part funded by Department for International Development, is to ensure Helmand’s civilian infrastructure is made robust to weather the withdrawal of Nato’s combat troops and civilian aid workforce.

Rather than building, Laing has ordered the PRT to focus on measures that make the Afghan government accountable. She also wants to protect and expand the role of elected local councillors – Helmand is the only province to have them.

So far, 432 British forces personnel and civilians have died while serving in Afghanistan, the vast majority of them since 2006, when the UK first set up base in Helmand.

In an interview with the Guardian a fortnight ago, the defence secretary Philip Hammond admitted he could not justify keeping British troops in Afghanistan for nation-building.

“I believe very clearly that if we are going to ask British troops to put themselves in the firing line, we can only do that to protect UK vital national security interests,” he said.

“We can ask troops who are here to help build a better Afghanistan, but we cannot ask them to expose themselves to risk for those tasks.”