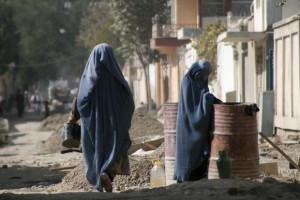 The Government of Afghanistan and NATO should ensure that protections for women and girls are a central component of transition and post-transition security frameworks for Afghanistan, the United Nations Assistance Mission in Afghanistan, UN Women and the United Nations Population Fund said today. As heads of state and NATO prepare for the NATO Summit in Chicago on 20-21 May, UNAMA, UNFPA and UN Women called on NATO and the Afghan government to fulfill UN Security Council Resolution 1325 which requires all parties to take special measures to protect women and girls in armed conflict and stresses the critical role of women in all efforts to promote peace and security.

“Now is the time to deal with the longer-term security and protection needs of Afghan women who have long borne the brunt of the war in Afghanistan,” said Ján Kubiš, United Nations Special Representative for the Secretary-General in Afghanistan. “Women’s specific protection needs should be central to plans being made as the Afghan national army and police prepare to take an increasing lead in security operations and the NATO–ISAF mission evolves from combat operations to training and assistance to Afghan forces.”

At the NATO Chicago Summit, heads of states and governments will consider how to provide continued support to the Afghan National Security Forces after transition is completed in 2014. This will include an agreement on how the Afghan government, ISAF nations and the international community together can fund professional, capable and self-sustaining Afghan National Security Forces in the future in line with the target set at the NATO summit in Lisbon in 2010. The Chicago Summit will also consider how funding commitments can be linked to fulfilling the Afghan Government’s obligations to realize human rights in compliance with the Constitution of Afghanistan and human rights treaties ratified by Afghanistan.

Women’s rights groups and Afghan civil society have stressed that gains made in the past decade for millions of Afghan women in securing equal constitutional rights, political participation, and access to health and education must not be compromised in any transition agreements between NATO and other international partners and the Afghan government, and in any peace negotiations.

“Protection of women during transition and in post-transition is critical as women are more vulnerable to insecurity and any breakdown in local rule of law,” said Georgette Gagnon, Director of Human Rights for UNAMA. “Transition should prioritize an increasing civilian policing role for the Afghan National Police over its paramilitary functions, including expansion of human rights protection with a particular focus on women’s rights and rule of law.”

UNAMA, UN Women and UNFPA stated that protection for women during and after the transition requires the Afghan National Police to be fully resourced, trained, equipped and sensitized to address effectively cases of violence against women and girls under the Afghan Constitution and other legal frameworks, more specifically through the application of the law on the Elimination of Violence against Women.

“It is important that the international and national community puts every effort into breaking the silence and ensuring that the voices of women and girls are heard and that the necessary services are put in place to support those women and girls. The role of field police officers is crucial as they are often the first entry point for those victims.” said Dr. Laurent Zessler, UNFPA Representative in Afghanistan. “Capacity building programs, as part of a long term commitment to develop field police officers’ skills to prevent and respond to cases of violence against women and girls should contribute to creating an enabling environment for women and girls to live in dignity and in freedom from violence.”

Stressing the important correlation between the consolidation of lasting security in Afghanistan and the promotion of women’s rights, Ingibjorg Solrun Gisladottir, Country Director, UN Women Afghanistan said, “Security is paramount for improving girls and women’s freedom of movement and access to education and health services. Women understand the drivers of insecurity in their communities and it is crucial to include Afghan women’s groups in decisions impacting on their security during and after the transition of security from NATO-ISAF to Afghan forces. The summit in Chicago needs to make space for women’s concerns and ensure an inclusive response to the security challenges that Afghan society is facing.”

The international community should provide increased support to the Gender Units of the Afghan Ministry of Interior, Ministry of Defence and the Afghan National Police to make these institutions more responsive to the needs of the women and girls. UNAMA, UN Women and UNFPA noted that peace is not only about political agreements on power sharing; it is about consultation, inclusion and ensuring that women and men at the community level experience peace and security in their daily lives and that women’s voices are included in all peace negotiations.

Referring to developing the Afghan National Security Forces as a responsible and accountable institution in protecting the civilian population, Georgette Gagnon said “The transition frameworks should allocate sufficient financial resources and build capacity within the Afghan National Security Forces for effective institutional structures to protect and mitigate civilian casualties in all counter-insurgency operations, in particular women and children casualties.”

UNAMA, UN Women and UNFPA stated that accountability mechanisms within the Afghan National Security Forces should include the establishment of a civilian casualty mitigation unit that is accessible to women and fully resourced to provide proper monitoring, investigation and compensation for civilian deaths, injuries and property loss. UNAMA, UN Women and UNFPA highlighted that compensation is of tremendous importance for women, who after losing their husbands or male relatives are often further exposed to violence and violations of their basic human rights in the highly traditional and patriarchal context of Afghanistan.

The Afghan National Police should also ensure attainment of its target to induct and train more women into the police force to improve its outreach and service to women and girls in communities while assisting victims of gender-based violence in a humane and ethical way.