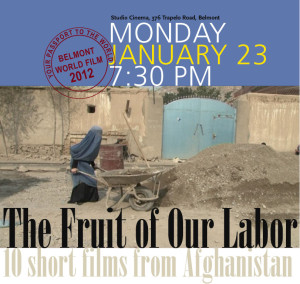 Many thanks to Belmont World Film and Ellen Gitelman for organizing this screening!

The Fruit of Our Labor is comprised of 10 short films made by native Afghans as part of Community Supported Film’s (CSF) intensive 5-week documentary production training program in Afghanistan in late 2010, each documentary offering a personal and first-hand point of view rarely seen or heard in the US, even after 10 years of intense media coverage. Together the films bring to life Afghans’ efforts to address their challenging social and economic conditions and provide a fresh perspective on the needs and issues of Afghans beyond the relentless battlefront coverage of Western media. The goal of these films is to promote discussion about the lives of individuals in Afghanistan and our role there, as well as more generally, about war, peace, effective aid, gender issues, and cross-cultural understanding.

Speakers: Community Supported Film Founder Michael Sheridan and several native Afghans. Michael is a filmmaker, educator and activist whose films address issues of social and economic development who was the co-founder of Oxfam America’s documentary production unit in the mid-90s. For nearly 20 years he has engaged the public in stories from Asia, Africa and the Americas about people in poor and developing communities challenging the status quo and struggling to improve their lives. His films have aired on PBS, ABC, TLC, and the Discovery Channel.

Purchase advance dinner & film screening tickets online here or to reserve your spot for the dinner and pay by check, send an email with the number of people to info@belmontworldfilm.org.  Space at the dinner is limited, so please reserve early.

Tickets to the screening may also be purchased on day of show at the Studio Cinema box office, 376 Trapelo Road in Belmont, Massachusetts.