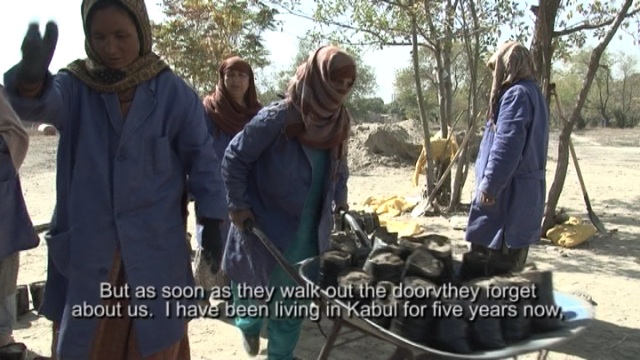 [Editor 7/21: CSFilm has removed the last names of Afghans and the images of those still in the country due to the deteriorating security situation.]

…Death to the Camera, directed by Qasem, received the award for the Best Afghan Documentary. The film simultaneously weaves together various issues – labour, gender, ethnicity and aid – and also questions the medium of documentary itself. An employer accuses a woman of being a prostitute for appearing before the camera. An argument ensues off-camera; the woman returns to a group of co-workers to vent her grievances. A spirited exchange follows with accusations of ethnic discrimination against the bosses and cynicism about the current political situation. The camera crew eventually pulls away, taking us with them. Said Qasem, “This retreat makes explicit the distance between the audience and the documentary subject. It also raises the question of mediation, central to this whole project: are we watching actuality or simply seeing something shaped and framed by those behind the lens?”