[Ed. 7/21: CSFilm has removed the last names of Afghans and the images of those still in the country due to the deteriorating security situation.]

Leading up to 9/11/11, Community Supported Film is releasing one Afghan-made film per day from the collection The Fruit of Our Labor.   As we reflect on the impact of 9-11 and the October 7th US-led invasion of Afghanistan on our lives, Community Supported Film is providing an opportunity to also reflect on the situation from an Afghan perspective.

The Fruit of Our Labor  is a collection of intimate stories made by Afghans and about Afghans’ survival in their war-ridden country.  Each documentary short offers a personal and first-hand point of view rarely seen or heard in the US, even after 10 years of intense media coverage.  As a series, these films bring to life Afghans’ daily efforts to address their challenging social and economic conditions – providing an insider perspective behind and beyond the battlefront.

Direction and Camera by Qasem
Editing by Hamed
Sound by Mona 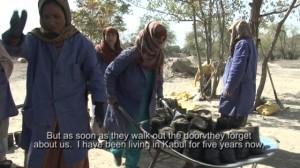 A camera moves among woman working their last day on a job site. As they joke and fight – accusing each other of being prostitutes, liars, and racists – the mood repeatedly shifts between belly laughs and rage. The women are left waiting for hours for their pay by the charity that administers the cash-for-work program. As they wait, they consider what debts they’ll pay off, what food they’ll buy, and how they’ll stay warm during the approaching winter. There is lively discussion about what happens to all the aid that never reaches them, and whether Karzai is a crook or a servant of the people.

Qasem, after growing up in Sari Pul and Balk provinces, Qasem studied in the Cinema and Fine Arts department at Kabul University.  He has previously produced a short video report on carpet making, served as a sports reporter for a community newspaper, and worked as a freelance production assistant.

In the interest of amplifying the voices and expertise of Afghans, Community Supported Film conducted an intensive 5-week training of 10 Afghans in documentary production in the fall of 2010.  After three weeks of rigorous exercises, each student was required to develop and produce a character driven short documentary.  The resulting films are gathered in this collection, The Fruit of Our Labor.  For many of them this is their directorial debut as a documentary filmmaker.  CSFilm continues its training and production program in Afghanistan.