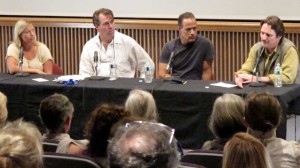 documentary series The Fruit of Our Labor at the20th annual Woods Hole Film Festival in Massachusetts. After the screening, CSFilm Director Michael Sheridan fielded questions and then participated in a panel discussion called Filmmaking and War.  The panelists included journalist Sebastian Junger – author of The Perfect Storm and filmmaker of the recent documentary Restrepo – and documentary filmmaker Beth Murphy, who produced and directed Beyond Belief and an upcoming film The List. Both the post–screening discussion and the panel were moderated by award-winning foreign correspondent Charles Sennott, who is also the Executive Editor and Co-Founder of GlobalPost.

The Fruit of Our Labor is a series of 10 documentary shorts made by Afghan filmmakers about the challenges of daily life on the ground. Restrepo documents the deployment of a U.S. platoon in Afghanistan’s Korengal Valley.  In Charles’ words, these respective filmmakers are presenting “photographic negatives” of a similar theme. While Sebastian stated his case for making a non-political film that shows the experiences of young American soldiers in and out of battle, Michael reasoned that most Americans only experience Afghanistan from the perspective of battlefront coverage.  He further argued that we need an understanding of Afghanistan from Afghan villagers’ point of view. “Only then will we be able to help ourselves and the people of Afghanistan,” he stated.

Sebastian said that many Afghans thought that 9-11 was a chance to get help from the world, and were excited by this turn of events. However, Sebastian continued, “the effort was squandered by the Bush administration, who forgot Afghanistan and went to Iraq.” Most of the cost of war, he agreed, is borne by civilians. 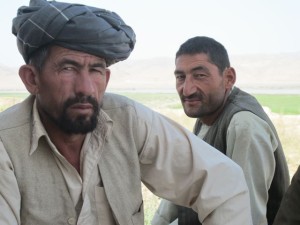 When asked about Afghan resilience, Michael compared the 15-month experience of US troops against the lifetime that many Afghan citizens have experienced the impact of war. With this in mind, he said, “Resilience is not even an issue. [Afghans] can’t do anything but survive; resiliency doesn’t even register anymore”. Referring to the experiences of those he works and lives with in Afghanistan, Michael said that Afghans are shattered physically and mentally, and they lack the type of therapeutic resources that might be available elsewhere. The toll that this takes can result in caustic attitudes, humor, distrust, and aggression. Recently, as president Obama announced troop withdrawal, tensions soared and Afghans, fearing the return of civil war, reviewed the escape plans available to them. For example, days after the Obama announcement a woman showed up at Michael’s door looking for assistance with her application to a community college in Nebraska.

Charles commented that watching The Fruit of Our Labor “was like coming into the middle of a conversation in Afghanistan” – and with unexpected revelations. He said it was eye-opening to him to hear such crass and saucy talk from veiled Afghan women, such as when one woman in Death to the Camera says she “would crush my husband’s balls if he became an addict.”

When asked about the goals for distributing each of the panelists’ films, Michael noted that he hopes The Fruit of Our Labor can foster discussions in general about Afghanistan, hopefully on a congressional and community level all across the country. One idea raised by Charles was how to get The Fruit of Our Labor seen by US military audiences and Restrepo seen more by Afghan civilians and insurgents.

Michael also talked about how ethnic conflict is a core issue in Afghanistan.  A welcomed effect of the 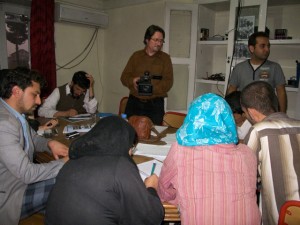 5-week training program was the positive growth that resulted from people of different ethnic backgrounds working together. The small team of 10 trainees represented 3 ethnic groups and included 4 women. While ethnic tensions made the work difficult at times, trainee evaluations throughout the program consistently highlighted what an amazing multi-cultural experience it was.

Screening The Fruit of Our Labor within Afghanistan has the same potential for bridging ethnic divisions. Michael noted that since pessimism and skepticism are so high in the country, for Afghan viewers to see other Afghans doing something positive really gets people talking. Even simply seeing non-scripted nonfiction films is a new experience in Afghanistan, as most people have only been exposed to soaps and Bollywood movies.

The event included a discussion of next steps. Michael explained that CSFilm’s goal, funding dependent, is to make the training and mentoring program in Afghanistan sustainable. This will include an ongoing cycle of teaching video production and post-production, proposal writing and business management, mentoring Afghans through the production of their own commissioned and independent films and the use of these films for public engagement locally and internationally.