Kabul is sunny and clear blue, except that is for the dense haze of dust and smog.  Incredible that people’s lungs can take it.  No wonder the average life span is 44.   At night it is like driving through a fog on the Maine coast. And then every once in long while it pours.

Driving through the city you can quite easily forget that there is a war on.  One soon stops noticing the men with guns at every door and street corner.  Once in a while you feel that something odd must be going on somewhere when nervous hyper vigilant foreign or Afghan armies pass in heavily armed convoys.

The majority of my time I feel like I am in any typically out of control South Asian city. The streets are a chaos of every day survival activities. Of course surviving is a rough business here and not only because of the decades of instability.  This is just another part of the world where there are too few jobs and too few opportunities, packed mostly with people only able to think about making it from one day and one meal to the next.

At night it is different from most places I’ve experienced – but typical for insecure places.  From 4-8 the city is stuck in one large traffic jam.  Once the knots are untied and the vehicles released there is little to nothing downtown.  Shuttered shops stand in long rows.  A few pedestrians quietly move around in streets that were hours before impassable.  There is nothing to do in the city at night – no music, no movies, no tea shops (of course alcohol is banned, so no bars – for locals anyway) and precautionary measures stifle what little social life one tries to find.  The other night I was waiting outside the French Cultural center to meet some colleagues.  The wide main street was controlled by a pack of dogs and once in a while a car passed at great speed – the faster they go the more likely they are inhabited by government officials or foreigners.  But otherwise nothing else.  I didn’t get into the French compound.  My colleagues didn’t realize that after 8:30 no one is allowed in – known guest or otherwise.  They finally came out and we followed their official French car as it sped, in classic form, to the French embassy guest house.  There our car was not allowed to wait outside for fear it contained a bomb. It waited elsewhere and returned when we called it – still intact.

So, so it goes.  Wake at 6 (well, I’m first woken at 4:30 by the myriad of calls to prayer), picked up at 7.  Bump along scarred roads and sit in traffic and haze until 8.  Arrive at the center where we are holding the training and madly work with the 10 students and my great team until 5 or 6.  Wait and work until 7, hoping for less traffic, and get back in a taxi or provided car, and either creep or careen through the dark fog back to my room.  A fairly normal day considering. 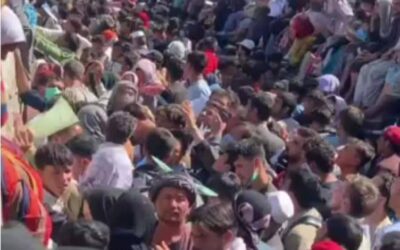 The day Kabul fell to the Taliban, August 15, 2021, Basir and his family made their first attempt to get into the airport and onto a plane. It would be nearly a month before they escaped into Pakistan. Over the next weeks they would be beaten at Taliban checkpoints, endure crushing crowds and be threatened and sworn at by soldiers from around the world. 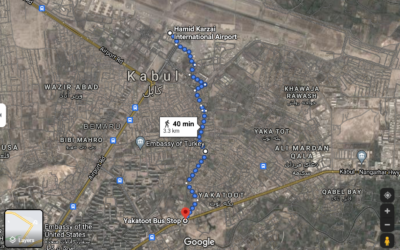