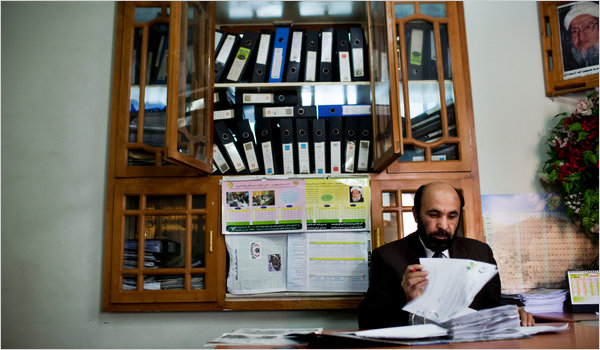 Muhammad Akram Khapalwak, a top official at the Afghan Peace and Reconciliation Commission, said some fighters who had changed sides in the past had been disappointed.

KABUL, Afghanistan — A $250 million program to lure low-level Taliban fighters away from the insurgency has stalled, with Afghans bickering over who should run it, and international donors slow to put up the money they had promised.

Notes from Afghanistan, Pakistan, Iraq and other areas of conflict in the post-9/11 era. Go to the Blog »
Multimedia

The Takeaway With The Times’s Rod Nordland

Six months after Afghanistan’s foreign backers agreed to generous funding for a reintegration effort, only $200,000 has been spent so far by the United States and little or nothing by other donors.

During the same period, the flow of Taliban fighters seeking to reintegrate has slowed to a trickle — by the most optimistic estimates, a few hundred in the last six months. It is not clear whether that is because of the lack of a program that would provide them with jobs, security guarantees and other incentives, or because most Taliban no longer see the insurgency as a losing proposition.

In the past five years, a poorly funded Afghan reintegration effort, the Peace and Reconciliation Commission, recorded 9,000 Taliban who sought to join the government side — compared with 100 since April, officials said.

“It’s almost dead,” said Muhammad Akram Khapalwak, a top official at the nearly moribund commission in Kabul. He said employees there had not been paid in three months. “The Taliban know the government doesn’t have a single policy for peace and reconciliation.”

There has been broad American and international support for a more ambitious initiative. When Gen. Stanley A. McChrystal took command in Afghanistan last year, he argued in his initial assessment that there was a need for a program that would “offer eligible insurgents reasonable incentives to stop fighting and return to normalcy.”

Defense Secretary Robert M. Gates, testifying in favor of such a program before Congress, said, “This is really about getting the foot soldiers to decide that they don’t want to be a part of the Taliban anymore.”

Congress this year earmarked $100 million to support reintegration programs, while at the London Conference on Afghanistan in February, several countries, Britain, Germany and Japan among them, promised another $150 million to go into a Peace and Reintegration Trust Fund, to be administered jointly by the Afghan government and foreign backers. A United States official said that as of August, only $200,000 of the American money had been spent on reintegration.

There is little pressure on the donors to meet their pledges more quickly, however, since the Afghans have yet to form an agency to spend the money. As one American official said, “There isn’t any there there yet.”

At a peace assembly, or jirga, in June, delegates agreed to form a High Peace Council, which would be responsible for trying to engage Taliban leaders in talks.

“I am telling you, dear brother Talib-jan, this is your country, come and have a peaceful life in the country,” President Hamid Karzai said, using a suffix that Afghans often attach to friends’ names.

Subsequently, at a Kabul conference in July, more international money was pledged for the reintegration trust fund, and delegates agreed that the High Peace Council would run the program financed by that fund.

Since then, a “force reintegration cell” at the NATO-led International Security Assistance Force, known as ISAF, has been working with Afghan officials on how such a program would be structured, but the program has yet to start because of bickering among Afghan officials over who would head the council.

“There’s a lot of political resistance to this from a lot of people,” said an American official, who spoke on the condition of anonymity because of the delicacy of the subject.

Gary Younger, an ISAF spokesman, said: “Because the Afghan government has the structure in place, hopefully it’ll move ahead quickly” once the council is formed. “We are seeing interest out there.”

Mr. Karzai’s office said in a statement on Saturday that the council’s members had been decided upon and that their names would be announced after the Id al-Fitr holiday, which begins Thursday.

Nonetheless, there is some doubt about how effective the council will be once it starts its work. “There are several parties from the government who don’t want the Taliban to come in,” Mr. Akram said.

Muhammad Dawood Kalakani, an ethnic Tajik member of Parliament, expressed a view commonly held among non-Pashtun minority groups: “We don’t want peace at the cost of losing the achievements of the last nine years in terms of human and women’s rights, civil society, media and governance.”

Insurgents who have changed sides in the past have been bitterly disappointed, Mr. Akram said.

Ghulam Yahya Akbari, an insurgent commander in Herat Province, was killed last October and 200 of his fighters surrendered to the Afghan government. To date, Mr. Akram said, none of them have received benefits other than emergency food rations, and they cannot return to their homes for fear of reprisals from the Taliban.

“Nobody finds them shelter, nobody gets them jobs, nobody opens a place for them in society,” he said.

More recently, small numbers of Taliban have turned themselves in to provincial officials in Baghlan Province and elsewhere, where local officials have run ad hoc programs to try to resettle them. In all, the American official said, estimates are that “several hundred” have turned themselves over in recent months, though he added that there was no way to verify the number.