Continued expansion into Africa of military

Military Manoeuvres in the Sahel
By Brahima Ouédraogo 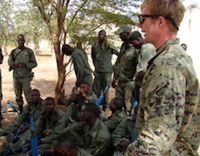 OUAGADOUGOU, May 14, 2010 (IPS) – Military exercises are under way in the Sahel region as part of the United States-led Trans-Saharan Counter Terrorism Partnership. Participating militaries are enthusiastic, but civil society cautions that force may not be enough to ensure regional security.

In recent years, the area between the southern limits of the Sahara desert but north of where West Africa’s savanna begins – has been the theatre for operations by militia groups linked to Al-Qaeda of the Islamic Maghreb (known by its French acronym AQMI). In addition, organised crime syndicates conduct racketeering and smuggling activities in the region.

Operation Flintlock 2010, taking place from May 3-22, is the latest in a series of annual U.S. military exercises in Africa, and will include forces from Burkina Faso, Mali, Niger, Algeria, Morocco, Mauritania, Nigeria, Senegal, Chad and Tunisia. Some 1,200 soldiers will be involved: 600 U.S. Special Forces, 400 from the various African armies, and 150 drawn from European countries, including France and the United Kingdom.

“The goal is to establish trust and build relationships with military forces of other countries,” said Anthony Holmes, deputy to the commander of civil-military activities of the U.S. military command for Africa (AFRICOM).

The manoeuvres, which will be supervised by U.S. officers, are being run from a Multi-National Coordination Centre set up for the purpose in Ouagadougou, the capital of Burkina Faso.

“The purpose of this exercise is to improve cooperation and interoperability of West African, U.S. and European forces and to enable communication and coordination between various forces from a dozen countries,” Holmes told IPS.

“Our task is even broader given the proliferation of arms and regional crises which offer an opportunity for terrorist groups to inflitrate and carry out their deadly actions,” Burkinabé defence minister Yéro Boly told journalists during the launch of the exercises in Ouagadougou on May 3.

“It is a great opportunity for us to get a maximum of experience and become more seasoned and better face the new challenges that appearing in today’s world,” said Boly.

For several years, U.S. Special Forces have supported the Algerian army against AQMI. Observers of the security situation in the Sahel say AQMI is made up of highly mobile groups that operate across an immense arid area nearly impossible to control.

The U.S. also regularly gives Malian soldiers anti-terrorist training as part of a programme begun in the early 2000s and encompassing many Sahelian countries.

AQMI was accused of several attacks over the last few years and is currently holding two Spanish citizens hostage. The group is also thought to be behind the kidnapping last April of a French national in Niger.

But Holmes said the current military exercises will not try to free hostages. “It’s not a question of solving the hostage situation. The countries where the kidnappings took place are responsible for that.”

Legislators from the Kidal region of northern Mali recently warned authorities of Al-Qaeda recruitment among the Arab and Touareg populations in that area.

But the legislators stated their preference for economic development rather than military operations. They argued that development would prevent Al-Qaeda from exercising any influence over young Malians.

Burkina Faso’s defence minister agrees. “The solution to terrorism cannot be just military simply because terrorism isn’t an identifiable enemy; the response should also be economic, because we must fight some of the fundamental causes of terrorism which are poverty and inequality in resource distribution between countries,” Boly said.   Alexandre Pagomziri Ouédraogo, head of human rights and fair governance at the Centre for Strategic Studies for Africa (CESA – the Centre d’études stratégiques pour l’Afrique), told IPS: “The fight (against terrorism) is very important, but the way it is conducted may discourage African countries, who see it as a territorial struggle between larger, more powerful nations.”

African governments, he added, are more preoccupied by poverty and exclusion. “The fight against terrorism needs to incorporate poverty reduction and improvement of living conditions in African countries.”

AFRICOM is not insensitive to these assessments. According to the planners of Flintlock, the exercise also includes civillian activities, such as providing health care to communities and veterinary assistance for livestock in the areas involved.