The challenges of development work led by foreign troops

This story is a wonderful example of why indigenous development work, such as the National Solidarity Program, should be the foundation of Afghan economic development rather than foreign troops.

SENJARAY, Afghanistan—Capt. Jeremiah Ellis is a man with a problem: how to spend a million dollars. 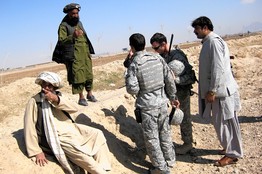 American troops under his command moved late last year into this town of 12,000 people, a Taliban stronghold just west of Kandahar. Now, armed with more than $1 million in coalition funds, Capt. Ellis is trying to dent the insurgents’ lingering power by jump-starting development projects.

Yet, the only construction work here so far has been the hammering of U.S. Navy Seabees, or construction troops, erecting a vast American base overlooking Senjaray. The town’s unemployed men prefer to stay home, for fear of Taliban retribution.

“You can have all the money in the world, but no one will pick up a shovel until they feel secure,” says Capt. Ellis, who commands the Dog Company of the 1st Battalion of the U.S. Army’s 12th Infantry Regiment. 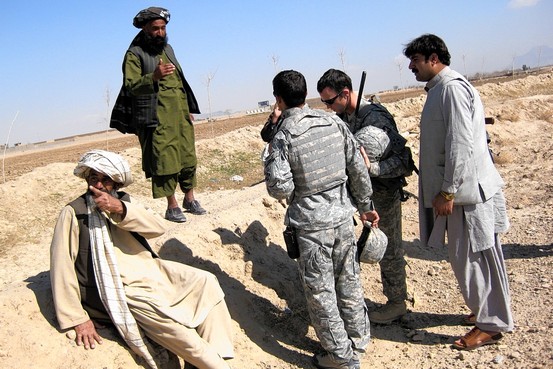 Capt. Ellis’s experiences in Senjaray set the stage for the anticipated coalition campaign in Marjah, in neighboring Helmand province, where the strategy also includes an effort to convince residents it is safe—and beneficial—for them to work with the coalition.

Providing potential insurgents with jobs is a key priority for commanders in recently secured areas of southern Afghanistan, such as Senjaray.

“When these guys will be busy, they will not grab their Kalashnikovs or be influenced by the insurgents,” says Canadian Brig. Gen. Daniel Menard, commander of Task Force Kandahar, a joint American-Canadian force that includes the unit Capt. Ellis commands.

In some parts of Kandahar province, such as areas of Dand and Arghandab districts, these public works—mostly digging irrigation canals—have already begun.

Since arriving in Kandahar province last summer to reinforce embattled Canadian troops, Capt. Ellis’s battalion managed to reassert control of this stretch of the highway, reducing the frequency of roadside bombings from several every day to one every few days. The Canadians built a large, modern school in Senjaray several years ago, but it has been shuttered since the Taliban booby-trapped it in 2006. Virtually no other work has been carried out here since then. “We couldn’t give money away because the people were afraid the Taliban would kill them,” says Canadian Sgt. John Carew, who works here on civil-military cooperation.

In town, only the Taliban dare to defy the will of Hajji Lala, who has a personal force of 40 guards assigned by President Hamid Karzai. The guards are paid for by the central government and wear Afghan National Police uniforms.

A recent meeting between Capt. Ellis and the town’s elders to discuss development plans was preceded by a shootout. Three Taliban fighters tried to ambush one of the policeman. The policeman was unhurt, and one of the Taliban was injured and captured.

But as Capt. Ellis rolled into Senjaray’s police compound, Hajji Lala wasn’t celebrating. The injured attacker, he said, was a local kid from a well-known family. “The Taliban are from here, they’re not coming into Senjaray from the outside,” Hajji Lala said. “Half of the village elders and the village people support them. If we start working on projects, people will be killed.”

Sipping on tea, Capt. Ellis countered that waiting for weeks until Afghan army units and additional Afghan policemen are deployed in Senjaray may be an even riskier strategy considering that fighting here reaches its peak around May.

“Every day, more fighters are arriving from Helmand and Pakistan, and if we don’t start soon, my concern is that we won’t be able to start at all,” Capt. Ellis said.

Minutes later, four turbaned, bearded elders walked into the compound, stoically submitting to frisking by young American soldiers. Capt. Ellis’s own dream is to reopen the Senjaray school—but, unless a permanent security force were deployed next to the building, the Taliban would booby-trap it again within days. He agreed with the elders that the first priority should be clearing silted irrigation canals.

“But we don’t need your soldiers—stay away from there. Come by just once a week to see how the work is progressing,” demanded one of the men, Hajji Hani Pia.

As Capt. Ellis agreed, the stickiest point turned out to be how to pay these 300 day laborers. The elders wanted to disburse the money—some $6 a day per worker—warning that any foreign presence would turn the site into a Taliban target. “If you promise me the whole world, I will not accept it,” declared one of the elders, Hajji Jalat.

The Canadian officers quickly interjected, saying their national rules require them to be present on pay day, to make sure the laborers funded by Canadian taxpayers actually exist, and that the money doesn’t end up in the elders’ own pockets—as has usually happened in the past. “I don’t want 300 workers being pissed off with us because they’re getting a fraction of what they’ve been promised,” said Canadian Petty Officer Kelly Webb, the coalition’s district official in charge of civil-military cooperation.

As Hajji Lala, the local chieftain, responded indignantly that he was insulted by such suggestions of corruption, Capt. Ellis offered a quick-witted retort. “I trust the Pashtun people and know that you wouldn’t do anything dishonorable,” he said. “But American or Canadian people would steal the money, and so we have to follow the American and Canadian rules.”

After hours of haggling, the two sides reached a compromise: The workers will be monitored by a concealed video camera on pay day, their receipt of the coalition’s cash documented on tape.

A few minutes later, the American and Canadian convoy rumbled onto the Kandahar-Helmand highway, following the elders to a site where they wanted the work to begin. As the miles added up, Capt. Ellis realized that the Afghans were taking him far outside Senjaray.

Finally stopping outside the gates of his batallion headquarters, the elders led the American to a dry canal bed and perched themselves on the ground—in the safest spot in the district.

Capt. Ellis wondered quietly about who owned the poppy fields around, and expressed his surprise at being so far from Senjaray and its citizens.

The elders ignored his protests. “This is where we will start digging,” said Hajji Hani Pia. “But the workers must not find out that the money is coming from the foreigners. Nobody should tell them.”

Then, he pointed at the poppy fields to the east: “That land there belongs to me,” he said, “that one to Hajji Jalat, and that one over there, to Hajji Lala.”